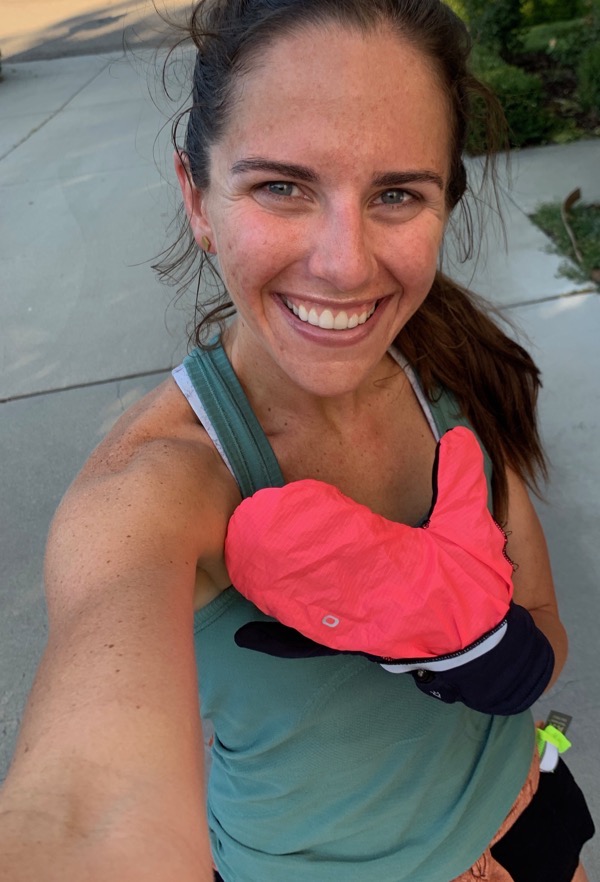 What happens when you add getting home from the airport at 1 a.m. + getting up a few hours later at 5 a.m. to run + being exhausted from all of the previous weeks of training combined = I FELT TERRIBLE during my run yesterday.  It happens, it’s done.  I don’t have anymore traveling before the marathon so I’m going to really focus on resting as much as possible over these next few weeks.  I also just think at this point it is pretty normal to feel terrible with marathon training.  Now that we will be entering taper time soon my body will rest up and recover to feel amazing on race day.

Andrew is the best.  He packed up my stuff and put it in the car the night before so I could just get up and go in the morning. 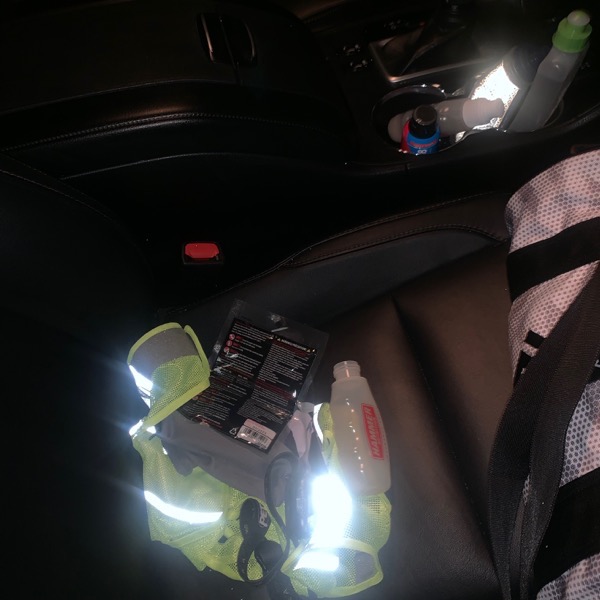 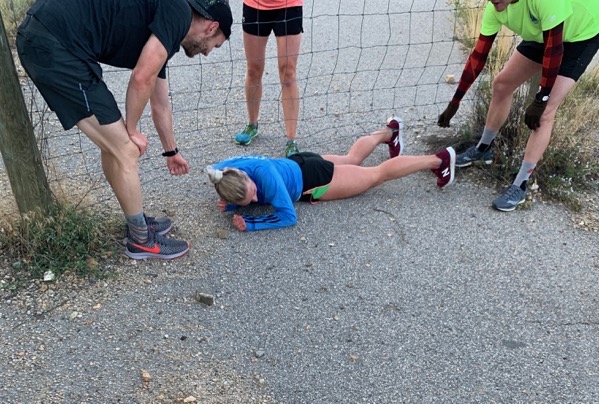 Here is how my training went this last week!  20 DAYS UNTIL THE MARATHON!  The mileage taper has begun and with just a few more big workouts to do, the work is pretty much done!

Thursday:  1.75 miles @ 9:25 average with the Brooks team:)  Sleep > getting up crazy early that morning before my flight to run that day!

Saturday:  14 miles @ 7:27 average.   MY WATCH WASN’T WORKING (it was way off from everyone else…) so I took a picture of Emilee’s watch because I was right next to her the whole time. 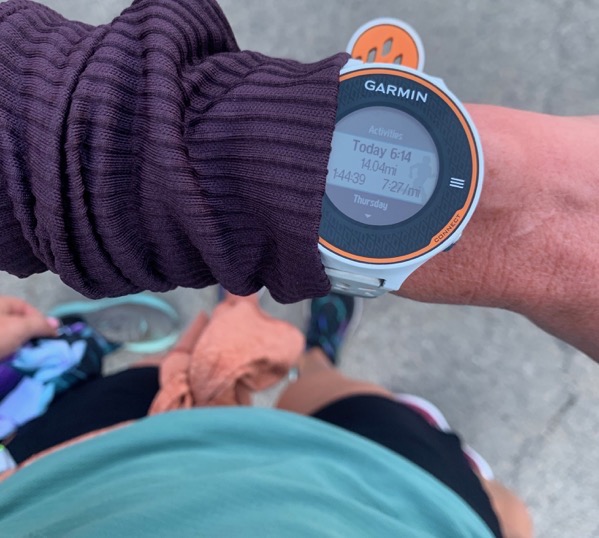 Anyone ever have problems with their Garmin being way off after you travel?  Is it ever off randomly?

What was your best run last week?  Worst run?

What do you have going on today?!

Lessons from Each of My 11 Marathons

A baby genius and will you be my running partner?

So many pictures it may hurt your eyeballs.

Hmm, that’s strange about your Garmin. I would call and see if they can help!

Best run was yesterday on the beach! We traveled to the coast for a xc meet for the high schoolers and the coaches have an annual tradition of running beforehand. It’s great! I also forgot to pack my brace from spraining it in May and it felt really good, even with the sand.

Today is running with friends, then church, naps, and family dinner. Sunday naps are my favorite!

Today I am attempting to run for the first time since fracturing my fibula (it was my lower leg right above the ankle..ugh) so nervous but feeling optimistic and ready!

Well once I thought my Garmin was off by A LOT.. but turns out I had selected treadmill instead of run 🤦🏻‍♀️ And yes, I’ve had other times that it just doesn’t seem to pick up the GPS as well, usually when I’m somewhere new.. but hard to say if that’s in my head or not 🤷🏻‍♀️

Hi Janae! My best run last week was my half on Sunday! What is it about the taper that makes us feel like trash and doubt all that training? EVERY SINGLE TIME!
Even on the Saturday before the race I was toying with dropping to the 10k!!! But that night I looked back through my training log to remind myself of how prepared I was…and mentally pictured myself running strong and earning that medal. It worked! And I took 7 minutes off my last half which was 6 weeks earlier.

Have a blessed Sunday!

Andrew = the best. Very thoughtful husband you have! That seriously warms my heart.

Ah crawling under a fence sure makes a run interesting lol. Love it!

20 days eek!
I just got back from church, putting baby down for a nap and hopefully putting my feet up to read for a solid uninterrupted hour:)

Oh that pesky little fence! Those are the things that make things adventurous and fun! Luckily you could actually go under it and weren’t totally barricaded!!! And if it had been dark you may have literally run into it! Yikes!!!

Today was 2nd long run of the weekend and it was nice-sometimes I actually feel better on this one than the day prior. go figure. The rest of the day was relaxed-went to the newly opened bakery for post run brunch then read my book and chatted with my dad (my parents are visiting us!).

Enjoy the rest of your Sunday!!

The fence and subsequent actions … kinda time consuming. I would go around, like seriously, sorry group/ group leader.

The real reason for my comment today is Andrew and his support for you! Getting the car ready, love!! The other day you wrote about your determined face and how Andrew has a different adjective for it, like scary or something. Then, he gets the car ready. So, seems like actions speak louder than words here. Be aggressive, be be aggressive (assertive, if you prefer). Be determined, be be determined!!!!!!

God bless Andrew! What a sweetie! He’s a keeper. Today I am going to a family reunion. I’m looking forward to visiting with folks I haven’t seen in years. The food is usually pretty epic at these things so that will definitely be a plus.

My garmin often shows the wrong pace, and it was actually off today on my long run! I live in a very rural area, so I suspect it occasionally loses the signal. Is your watch ever off on the trails? Sometimes I find mine is less accurate in wooded areas. It is quite frustrating, but I try to stay positive and look at it as a lesson in learning to run by feel and not always being a slave to the pace shown on my watch :) I have also heard of people running marathons in big cities losing the signal for some of the race where there are lots of big building. If you find out any tips or other reasons watches can be off, please share!!

Yesss I am so glad to see this happens to others and not just me overreacting! Not glad it happens to you but everytime I run in a shady area under trees, my pace apparently slows wayyyy down. It’s so frustrating but I like your outlook on it!

A few weeks ago I looked at my Garmin and noticed it was WAY off. After I finished it let me know I had a new mile PR of 1:26! Haha! The map is hilarious! It shot way south of where we live back North to where I was running. I also live in the country and occasionally have trouble but this one takes the cake!

My Garmin was confused the last time I flew and changed time zones. I called Garmin and they told me to start an activity, let the clock run for a few minutes, then stop it and delete the activity. As soon as I did that, the time zone updated and everything worked like normal. So you might try that in the future! Love your mittens! I’m so jealous of your cool UT mornings. Still at least 70° and 7%-plus humidity here in SC. 🥵

A couple of months ago, I told you about my upcoming 25k. My longest race ever and it was a trail race. Well, it was yesterday AND it was an amazing experience. I’m sore today, but feeling good! I wrote about it all, on my blog. I’ll include a link here. I hope that’s okay.
http://changingmeforlife.blogspot.com/

OH MY GOODNESS… so much water on your race. You rocked it Susie and I am so happy you had such an incredible experience. You. Are. So. Strong! Loved all of the pictures!