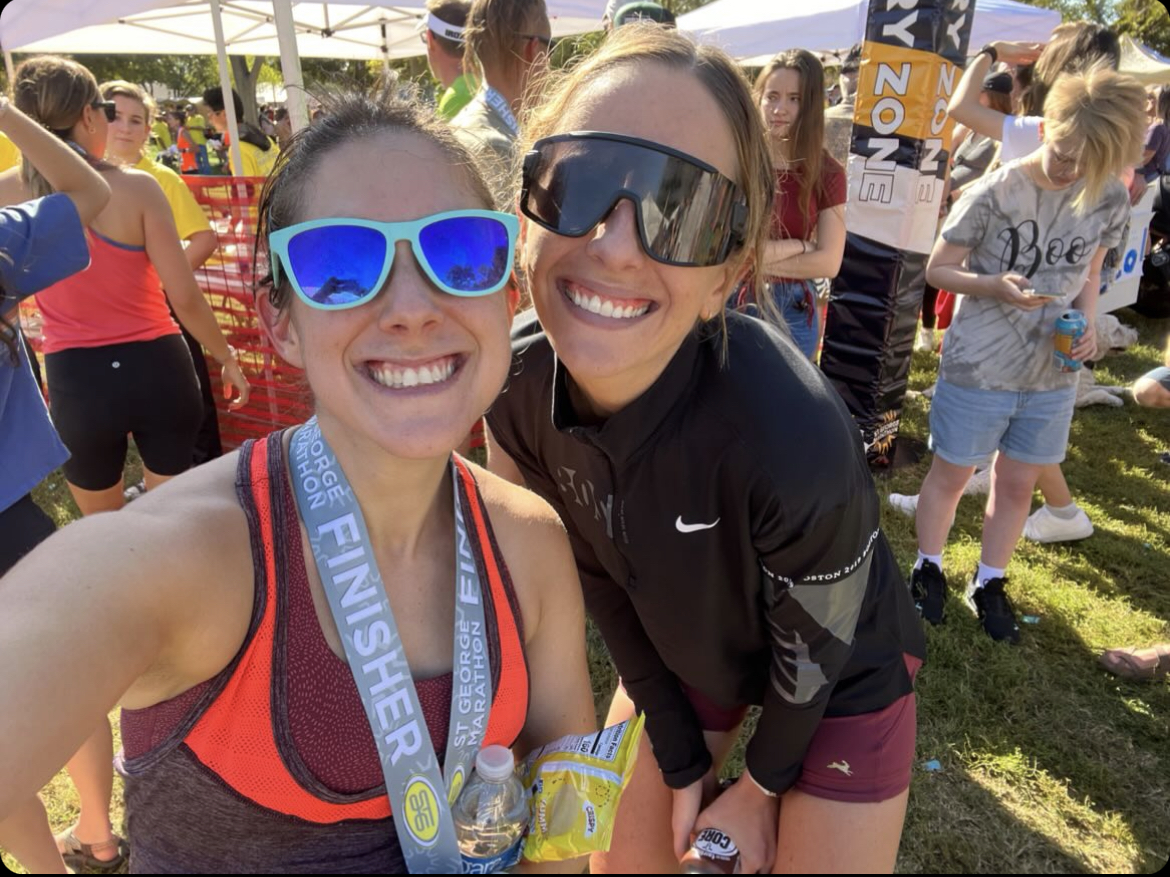 I have nothing but goodies from the marathon weekend to share with you today! I’m resting up, recovering like a champ, and staying up until midnight with Andrew.

*Jenny B! Meeting internet friends at races is the best. I for sure want to do a meetup in Boston next year!

*Keira posted on my IG, and I could not believe it.

*Andrew and I do life very differently in some ways. He had a class final that had to be finished by 9/30… so when did he decide to take his final? 9/30 @ 11 pm ha (the test takes an hour). He crushed the test then woke up at 4 to do the marathon thing. He is beyond amazing.

*Our friend, Adam, had such bad hamstring issues he was about to drop out until Andrew had a bag of ice for him to stick on his hamstring at mile 18, and he went on to hit a 7-minute or (2:42)!

*After the race, I went from feeling like I was on the sun’s surface to shivering like I was in Antarctica. Not a feeling I want to experience again.

*Just Beck’s model pose as he waited to see me at the 10k.

*My decision to skip doing CIM was confirmed. My body needs some major recovery, and I’m going to give it that after a fun year of racing.

*My brother and his family brought this over the day before the marathon. They are the best.

*My friend said I passed him at 26.1, and he feared my determined face. I look so angry when I’m racing, ha!

*These two got in some racing!

*We spent the rest of the weekend playing. I felt like a train hit me when I woke up on Sunday, but once we got moving, I felt much better.

Procrastinator or get it done asap?

Have any tangents today?

How long do you usually take off after a race? 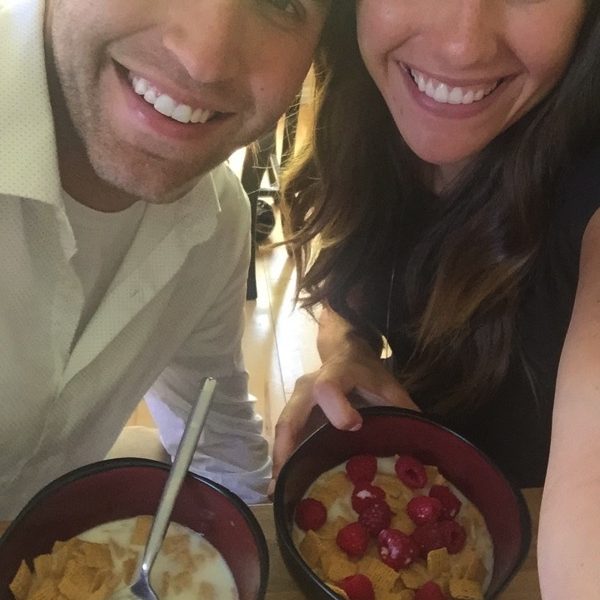 This might be a problem, the lake with the peeps and training last week! 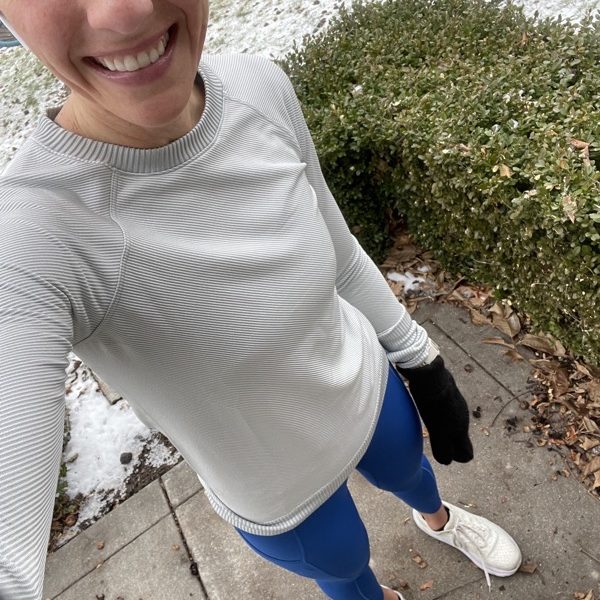 A running task I need you to accomplish + tangents! 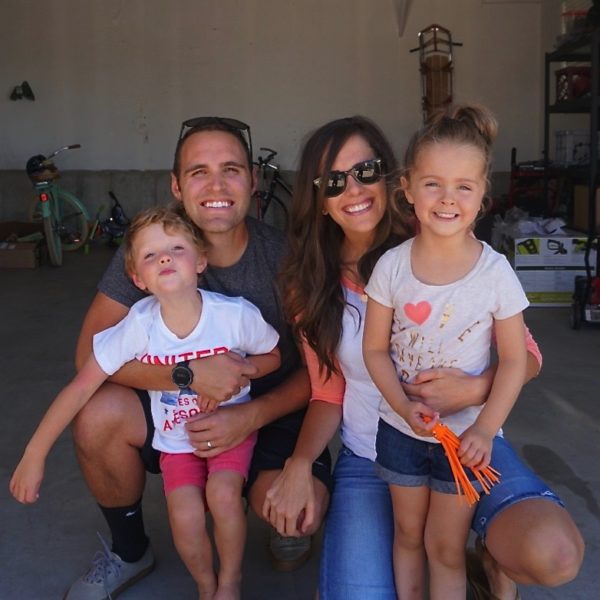 Ok your brothers kids are hilarious 😆

Hahaha he must have rubbed off on them a little;). Have the best day, Sara!

I love this post! congrats on your PR!!! You are so very inspiring and in todays obsession with “the grind”, to see you openly take rest and recovery time is so very refreshing. Sometimes I feel guilt for “backing out” or taking rest (from ANYTHING) but it’s truly underrated and thinking long term about the benefits is what helps me make those decisions.

It depends what it is for procrastination vs get it done ASAP and if its something I actually want to do. I’ve learned that getting the thing I want to do the least out of the way first is best for me mentally but it doesn’t always happen that way.

I’m a self proclaimed “raceless runner” but I’m hoping to change that soon!

tangent: I look forward to reading your blog everyday, thank you for sharing so much with your internet friends

Thank you so much, Brittany! YES, I am allllll about recovery and sleeping and taking life slower hahaha! Do not feel guilty and if you do, message me and we will talk through it. I’m with you on getting the thing I want to the least fast or else my brain goes crazy. THANK YOU for being my internet friend. It means the world to me. I don’t know what I would do without you guys. Have a beautiful day!

Feel free to keep all the marathon content coming!
Brook’s “you’re my best friend” on the sign is just too sweet!
•
How long do I take off? As long as coach Lauren tells me to take off. Usually a week of complete rest then followed by light walks for a week.
•
Also! I hope the missing Gatorade mystery gets solved. Very curious what the heck happened there.

The best friend part made me want to cry (even if people say you shouldn’t be your kids’ friends… I fully disagree haha)! That is what makes having a coach the absolute BEST! Same…. it was night and day difference from the previous year that I did it with bottles. Maybe I should hire Kipchoge’s water bottle guy for the next one;). Have the best day, Molly!

Let’s be recovery buddies this fall! I’m doing one more race Saturday (Olympic Triathlon) and I am definitely feeling the need to be D O N E.

Andrew is nuts, I’d be hyperventilating putting it off that long.

And since we are besties I am basically an incredible triathlete living in DC with quite an impressive resume ;). Hahaha not sure that made sense.

GOOD LUCK ON SATURDAY! Wish I could be there to cheer. Yep, all of the easiness this fall… let’s keep each other in check. Lots of candy corn too.

Hi Janae! Enjoy that well earned time off!
My husband is also a procrastinator like Andrew, which makes me super nervous. I am the opposite!
I’m off to another group run now! I’m really loving these!
Have an awesome day!

Thank you so much, Amy!
HOW DO THEY FUNCTION? This is why I don’t ask many questions ha because I can’t handle his stress (when he isn’t even stressed about it). I am so happy about your group runs. They are as good as it gets. Thanks friend, you too!

Congrats on your marathon PR Janae! I didn’t get a chance to read it yesterday so just catching up now. Wow-you are so inspiring and thank you for sharing your mental strategies. I’m gearing up for NYC and the nerves are starting to kick in a little. So many good ones in there that I’m going to try to remember. Enjoy your rest and have a wonderful day!

Thank you so much, Renee! I am SO excited for you to run NYC! The crowds will carry you when things get hard. I would love to hear all about it afterward. Have the best day!

You are so inspiring and relatable – thank you!! Just wondering if you did a full carb load and how that went. Perhaps you have a post coming up, but I wanted to ask :)

Thank you so much, Jenny! I did do a full carb load. I tried my best to track close to the calculator here for a 3 day carb load–> https://www.featherstonenutrition.com/carb-loading/.
I will write more about it too! Hope your day is a great one!

I would die if Keira D’Amato commented on my post! SO COOL!

I am not a procrastinator, nor do I like to stay up late, so an 11 pm test is a hard pass hahaha.

I seriously had to rub my eyes because I thought they were playing tricks on me! Thank you, he knows how to pose! RIGHT? My brain does not work at 11 pm! Hope your day is a beautiful one, Mariah!

Kiera’s comment on your post, awesome!! And yes, keep the marathon reflection talk coming. It’s so inspiring.
My youngest son is like Andrew with procrastinating. It makes me so nervous. I will sometimes procrastinate, but not that much.
Keep enjoying all your recovery time. Have a great day Janae 😊

Thank you, Wendy! I might be talking about it for way too long. Ummmm how did you handle that?! I keep hoping my kids don’t follow his lead with this haha, I get so stressed. Happy Tuesday, Wendy!

What a great race! Congrats!!!!
I love Keira, donuts and race recaps, so this post was awesome!! I will be in Boston next spring, too!! So excited 😁

SEE YOU AT BOSTON!!!!!!! Keep me updated on all of your training. Thanks Mel!

Your response to Keira’s comment is basically my response to seeing this photo on your blog :D So happy to have met you after so many years of reading; there is no way I’d have been at the race at all if it weren’t for your blog. Wishing you a speedy recovery, I think I still feel like a train hit me, ha (and after a marathon I always take one week off from any cardio, two weeks total off from running, but I did say I’d teach spin tonight so that’s going to be interesting…).

BAHAHAH OH STOP IT! We are best friends now. Can we go to lunch or something someday? I also want to come to your spin class!

YES please, there is no way I won’t be back in Utah at some point — and yes, if you ever find yourself in St Petersburg Florida you most certainly must come to spin (but maybe not when I’m recovering from a marathon…) :D

Congratulations!
I am a professor and I used to teach DNP students who, like Andrew, would wait until the absolute last minute to take their exams. I always told them NOT TO DO THIS because without fail someone would have computer or other tech issues and then there wasn’t enough time to fix it! It’s unnecessary stress, Andrew! :)

Ali! Hahaha guess who was at Walmart at 10 pm stressed out of his mind because his camera wasn’t working… ANDREW! You are SO right haha. Thanks for sharing!

I got 3 more grey hairs just reading about Andrew… I am definitely not good at procrastinating (or staying up until 11:00pm even) hah!

Also, your brother’s family sign is so sweet, Beck is a full on toddler all the sudden and KEIRA!!!!!

Enjoy this mental and physical break, I think it will do wonders.

That picture of B on the ground is soooo cute!!! You should recreate that every so often!
Your brother’s kids are hilarious. They really put thought into their messages!!!
Brooke’s sign gives me all the feels. So sweet!

I freeze about 10 minutes after stopping. First it’s a sweat fest, then I chill off to glacial temps.

I think your gait is so interesting, and so fast!

Hi Janae, I apologize if I missed it in another post, but if you haven’t commented already, I’d love to hear how you feel about the OTQ standard being lowered to 2:37 for 2024. There must be a ton of women who are like you and were so close to the previous standard, so I’d be curious to hear your thoughts!