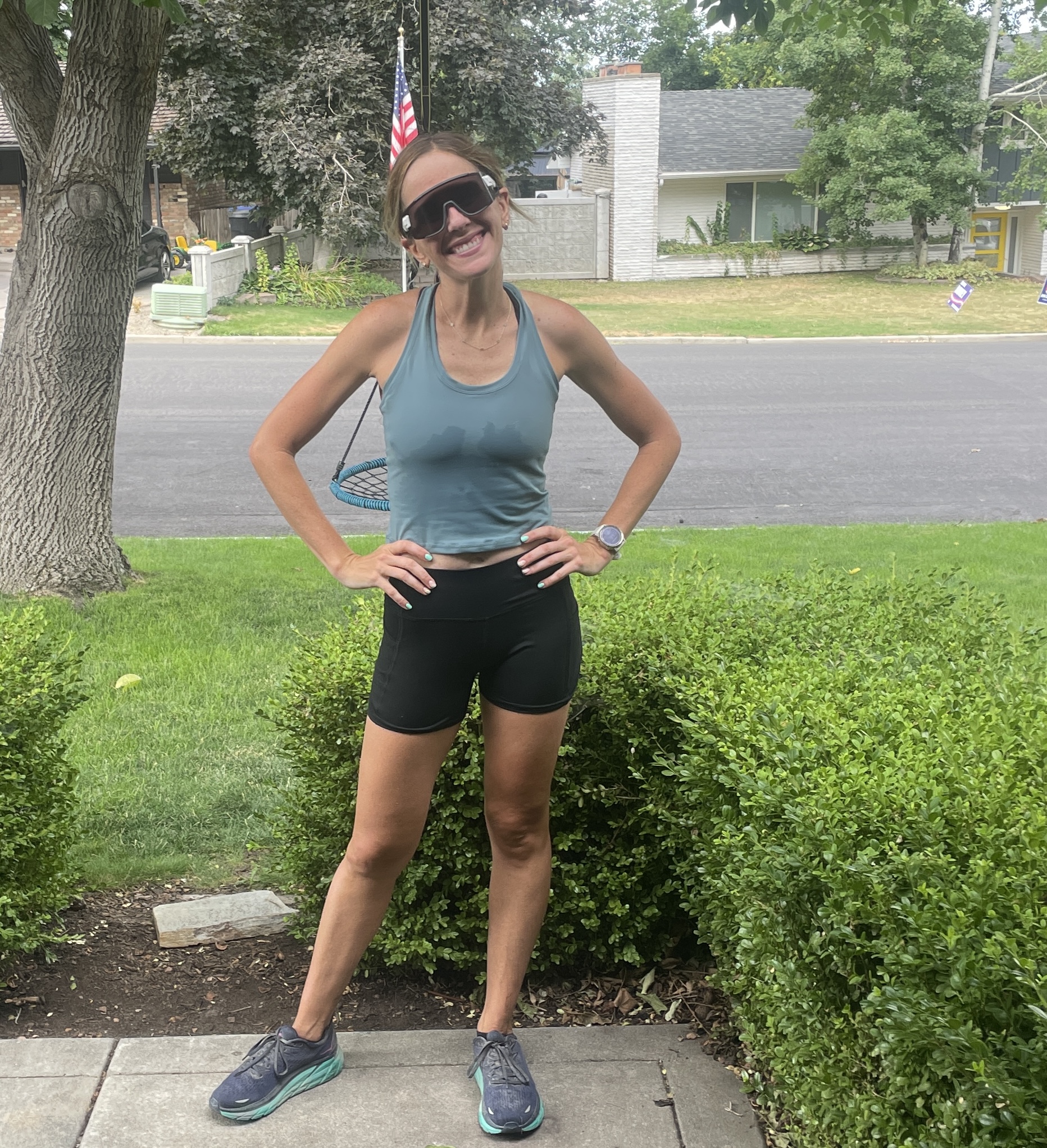 I am extremely grateful for stores that let us come in and get water. This station saved us.

Skye was pleased I had a roly poly on my tank when I finished.

Sarah was in town from Switzerland, so I snuck in some with her. Andrew and I have officially decided we are taking the whole family there next summer for two weeks. Sarah will help us see the best of the best while we are there.

We went to Greek-n-Go, and I officially ranked their sweet potato fries as the best in Utah. I’m open to peacefully debating this in the comments, but I will stand by this decision.

And because I still needed a bit more salt… these were present on our porch date.

Now for some tangents.

*Curly (my niece) eats Ramen Noodles without cooking them and dips them into the seasoning?! Andrew told me he did the same thing as a teenager. Is this normal?

*She and Beck communicate purely through facial expressions.

*We have been dressing a lot alike lately.

*At my last half-marathon, a man was wearing these shoes for the 13.1 miles, and I was very impressed!

*Still my #1 favorite way to prevent chafing. It works like magic.

*I don’t remember the last time I ate a banana without being asked for the sticker on the peel. I will really miss this when they are all teenagers.

PS which is the perfect banana?

Give me a tangent today!

Who has an August birthday, race, or anniversary?

Ever gone for a run in anything other than the traditional running shoes?

-I used to run in the Vibrams 5-finger shoes a few times a week!

My left shoulder sure gets sweaty. 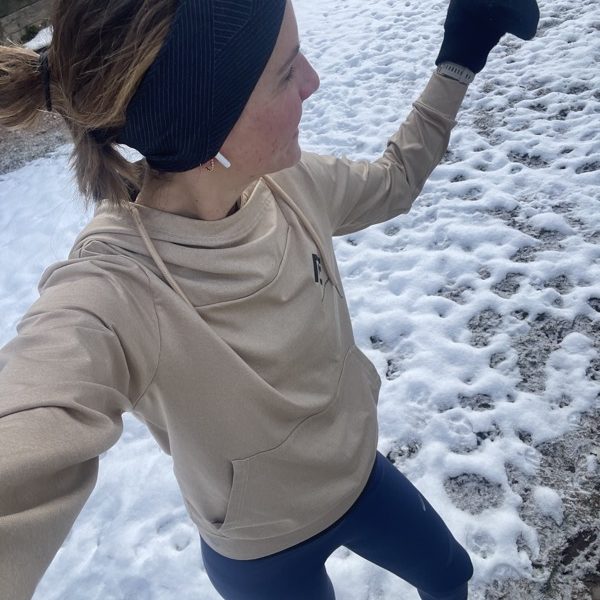 Tangents + This is Weird.

A question for you and extra endorphins.

I used to eat dry ramen and LOVED it. I didn’t even dip it into the seasoning. Thank you for the nice memory. :)

The perfect banana for me is a 5.

I hope your next run feels better for you!

Good to know that my niece and Andrew aren’t alone in the ramen noodles thing… maybe I will have to try it ha. HAPPY BIRTHDAY in a few days. I hope you celebrate all month. Thank you so much, today was much much better. Have a great day, Joy!

I will change my last name to Baron and dress like you and Brooke if I can join you in Switzerland!
Also a little late but I love your new hair!

YOU ARE IN! Give me your dates of availability haha. Thank you, Molly! It feels so fresh:). I hope you are having a great morning!

Me! My birthday is the 6th and I have a half marathon on the 14th.

FOUR DAYS until your birthday wahoo. You have such a fun month. Let me know how the half goes, cheering for you! Have a great day, Allison!

You are going to LOVE Switzerland!!! I’ve visited several times and it’s the place I most want to return to. I’m jealous already!

Bailey, come with us! That is so great that you have been several times! I can’t wait and you will have to tell me your favorites. Have a great day, Bailey!

9, and put that banana in the fridge!! My husband and I cannotttt do the texture of room temp bananas. I am gagging thinking about it. The fridge makes the banana sturdier and easier to slather peanut butter all over it.

I have never tried that! Off to put all of my bananas in the fridge, great idea! Thanks Lauren and I hope you have the best day!

There is a McDonald’s 30 miles from me that I often pass on long bike rides and I offer to pay them for cups of ice but the always give it to me for free! So good to fill up my bottles in the summer. I also pass a McDonald’s 1 mile from home and on super hot days I contemplate stopping to go to the self-serve drinks and pour ice down my top.

My uncle makes a salad with bits of dried ramen noodles in it and it’s really good! But I don’t know about eating them dry straight.

August is my bday month, very excited for this one.

That is so nice of them. People are the best! I think you do need to stop for that ice. It has been humid the last few days here and I just need your autograph. I do not know how you do it. HAPPY birthday month. I will eat bags of swedish fish on your birthday to celebrate you. Have a great day, Victoria!

I’m so excited for your family to go to Switzerland! My 4 year anniversary is this month and next year my husband and I want to do Italy to celebrate 5 years – but Switzerland is right there and Sarah’s post about Switzerland was so tempting! I’ll have to do some research and decide!

Tangent and Switzerland related – just read The Sanatorium by Sarah Pearse and I read it in two days! It’s about a sanatorium in Switzerland that has been converted to a hotel, so obliviously there is mystery and intrigue! I highly recommend it!

Thank you, Rachel! We seriously cannot wait. Happy anniversary this month and I love that idea to go to Italy to celebrate 5 years and I definitely think you’ll need to pop over to Switzerland too. Off to buy that book, thank you so much to share it. Thanks friend, you too!

Hi Janae! It’s my birthday next week! When I was a teen I would run in whatever I had, so sometimes that was jean shorts! I didn’t discover high impact sports bras til much later and I’m so glad I did!
I can’t think of a tangent right now but if I do I will update!
Have an awesome day!

Happy happy birthday next week! I hope you get in so much celebrating. THANK GOODNESS for high impact sports bra ha, I don’t know how any of us ever lived without them. Thanks Amy, you too!

Eww…really noodles not cooked? I don’t even like that salad that people crunch them up in raw. Silly kid!
August 23 birthday!!!! 🎂

Hahaha my niece is here right now and I just read her your comment and she said she dares you to try it today and report back;). HAPPY BIRTHDAY MONTH! I hope you celebrate big time. Thanks Shannon!

No shoe story, but one time I went for a run in my work clothes: trousers, blouse, and cardigan. It was fall, had tennies in the car was going to go for a walk and turned into a 3 mile run.
I wish we had a greek and go. Looks delish.

I LOVE that. Sometimes you just gotta do what you gotta do no matter what you are wearing. Also, your comment about too much noise yesterday… you figured it out for me. I just don’t want any noise anymore. We get each other. Come stay with us and I’ll take you there every day. Have a great one, Erica!

between a 7 and 8 on the banana scale is just perfect; 10+ means pancakes or banana bread so that’s even more perfect, ha.
I have had Ramen noodles only once in my life (cooked in a coffee pot because that was the only thing available at midnight in my hotel room) and maybe eating them dry would have improved my experience from -4 to 0…

My tangent for today… I picked up my uniform for the European Championships in Munich this summer. I will be working as a volunteer amongst others at the Marathon event and maybe the female road cycling event (I am a cyclist so that would be a second dream come true…) I live in Munich so it’s even more perfect and I AM SO EXCITED!!!

Well now I need your banana pancake recipe:) I hope you get plenty of 7/8 bananas from here on out. BAHAHA I’m guessing it would have greatly improved the taste/adventure of that night in your hotel room. I think you need to try them one more time to see what you think of them. WHAT?! That is incredible. Moni, I am so jealous. You will have to fill me in on everything and all of the highlights. Enjoy every second!

The ramen thing is actually a very common snack in Japan. They crumble it up into bite size pieces, sprinkle with the seasoning and then toast it.

No way! I need to try it. It was my first time seeing it. I hope you have the best day, Dawn!

Oh my gosh, when I was a teenager, I had so many friends who ate their Ramen Noodles like that! I was never a fan of it but this was such a blast from the past!! Totally forgot about it!

I want to know more about you running in vibrams! What distance would you run in them? Did you feel like there was a benefit? Sometimes I think walking around barefoot outside helps my achilles tendonitis.

Love a good blast from the past. I just can’t believe it was my first time seeing it! I wore them because I kept getting injured and I was trying to find solutions to my injuries. I never did more than 5ish miles in them but I still kept getting injured so I stopped trying them. My old coach told me to run in the grass to help with my plantar and achilles so I can absolutely see why that would help. Keep me updated on if you try them and have the best day, Torrie!

I definitely forgot I used to crush up my ramen and pour the seasoning on it and eat it dry :)

Yay!!! I am so excited for you guys to go to Switzerland! That will be amazing!
We take our banana ripeness very seriously here… They must be a 5 or 6, then they’re only good for smoothies. Ha ha.
My husband and I are celebrating our 28th anniversary on the 6th! It seems impossible that we’ve been married that long.
My poor mom-in-law broke her patella a couple weeks ago, she’s in a full leg cast, so I am off to go help her for the day 😊

I’m totally with curly – Raw ramen noodles are yummy, we used to eat them all the time as kids! Although my mom would never let me so it was more of a secret treat at friends houses .. ha ha

I went to elementary school in Hawaii. Recess snacks were always a package of dry ramen noodles – we’d break it up in a sandwich bag with the seasoning and shake it up.

I will say I tried it recently out of nostalgia and it didn’t have the same excitement or taste :)

Banana 3-6. Anything beyond that is mushy and gross.

Banana 4 or 5 max to eat, after that I cook with them….Although my thing that most people can’t understand is mayonnaise on bananas or banana/mayo sandwiches. I grew up on them. They do exact strong feelings in people though. I also love peanut butter/bacon/cayenne sandwiches…no mayo. ;) – but grilled sometimes. Those are amazing.

I’ve had ramen salad. I think either Smitten Kitchen or Sweet Eats does a great recipe for one that is amazing….

When I was a kid, we’d take the ramen, crush it in the bag, open it and pour seasoning in the bag, then close and shake the bag and that was our snack (plus, no dishes).

Also, today is my birthday!