I’m back again!  Then it will be a few more years until you hear from me because that’s how long it takes me to remodel ;). Before we get to the remodel, a few more family pictures.  It is so weird to post family pictures without my oldest, so let’s pretend we don’t notice the photoshop fail :) 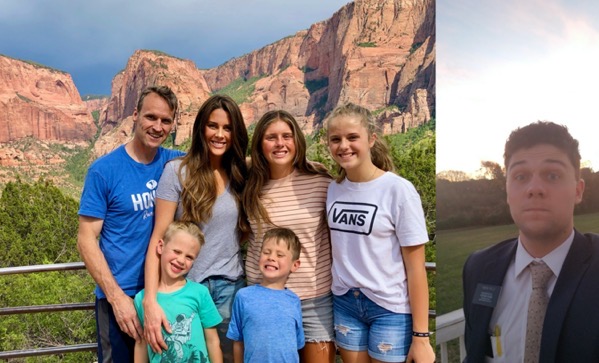 I have another driver! I feel like most remodeling shows only depict the super fun parts of remodeling….like demolition, design choices, and the big reveals.  This is what a lot of remodeling looks like, the tedious work of filling in a million nail holes ;(. My least favorite part! Now for the kitchen reveal!  Before 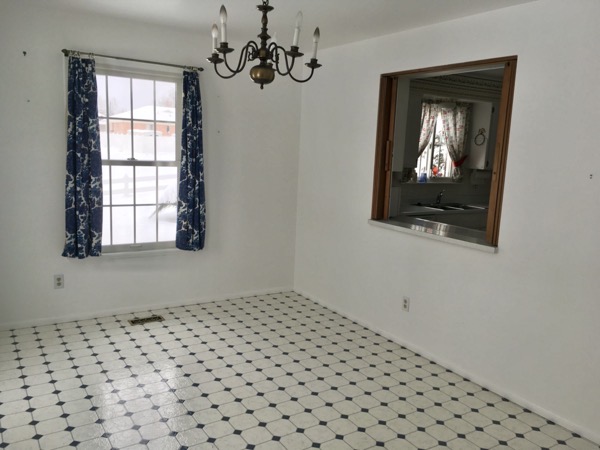 After!  As you can see, I took out the wall (not load-bearing) between the dining room and kitchen. 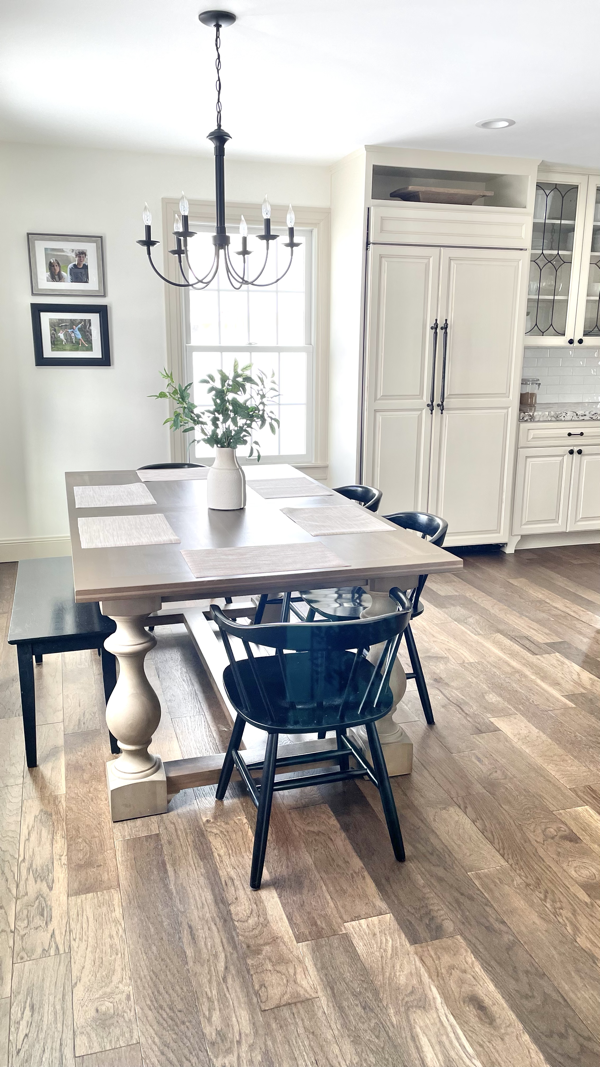 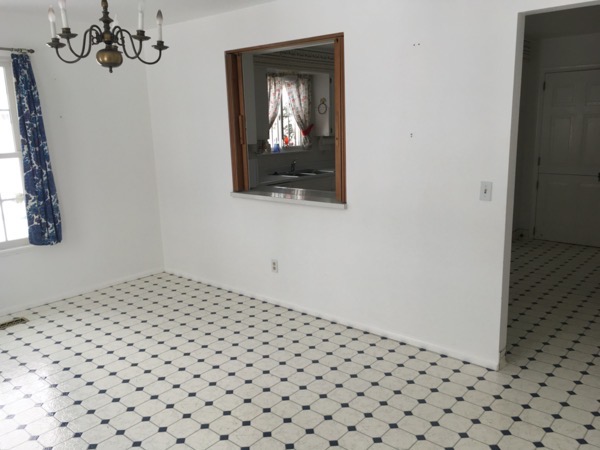 After.  This kitchen is one of my greatest deals of all time!  A multimillion-dollar home in Park City was being remodeled by the new owner.  He was selling all of the cabinetry and appliances on the classifieds for $4900!  The house had only been a second home for the previous owner, so everything was basically brand new!  I still have a room full of cabinets that we couldn’t use because our space wasn’t big enough and an extra dishwasher because I couldn’t fit two in like they had in their house ;) 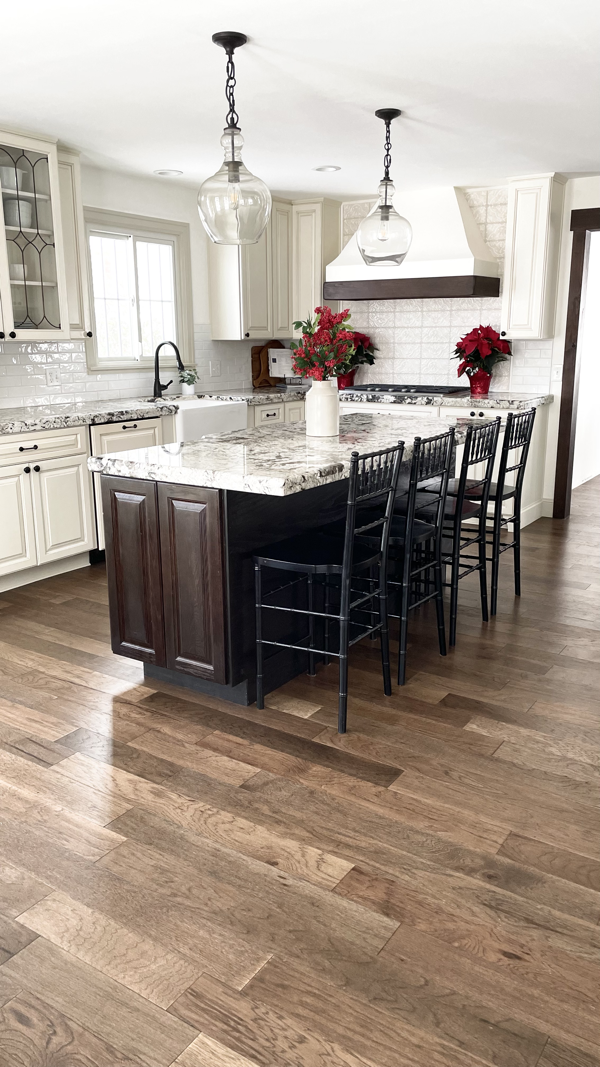 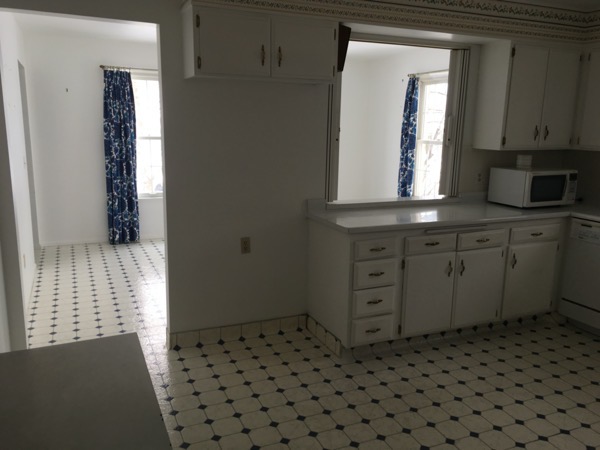 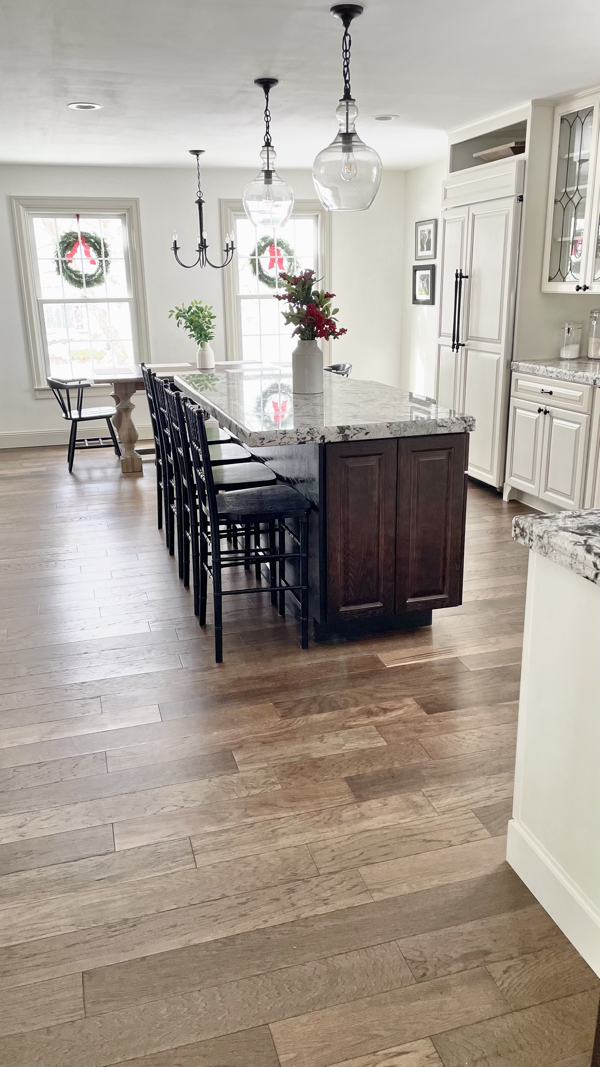 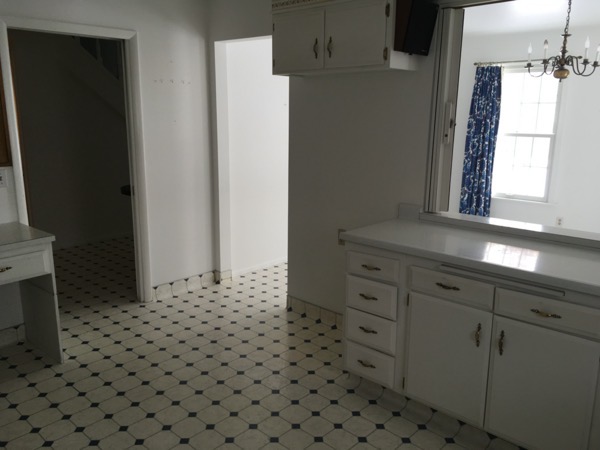 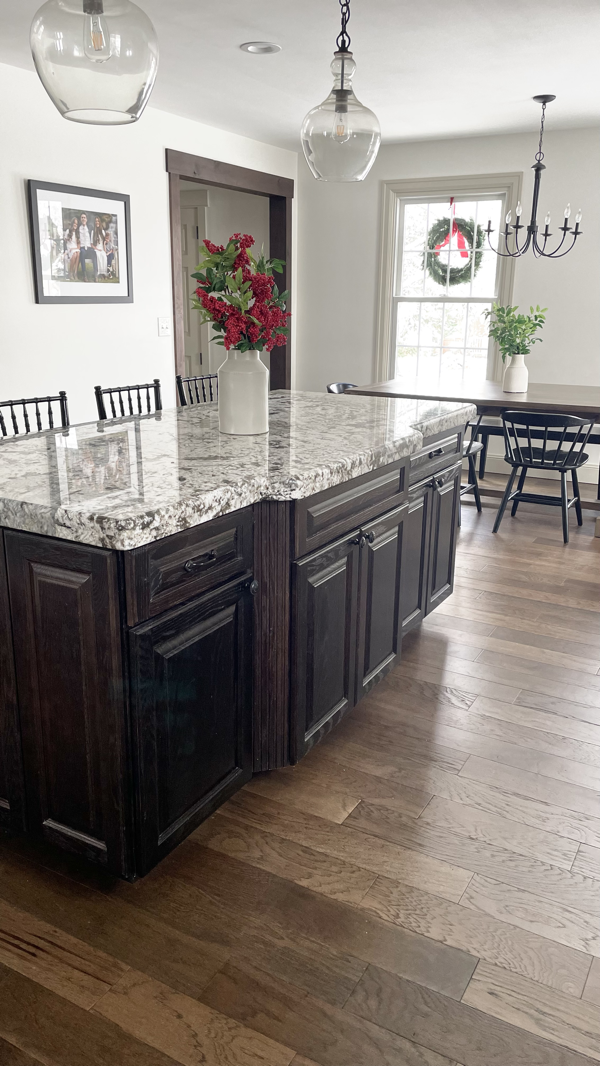 A few more angles I don’t have before pictures for. 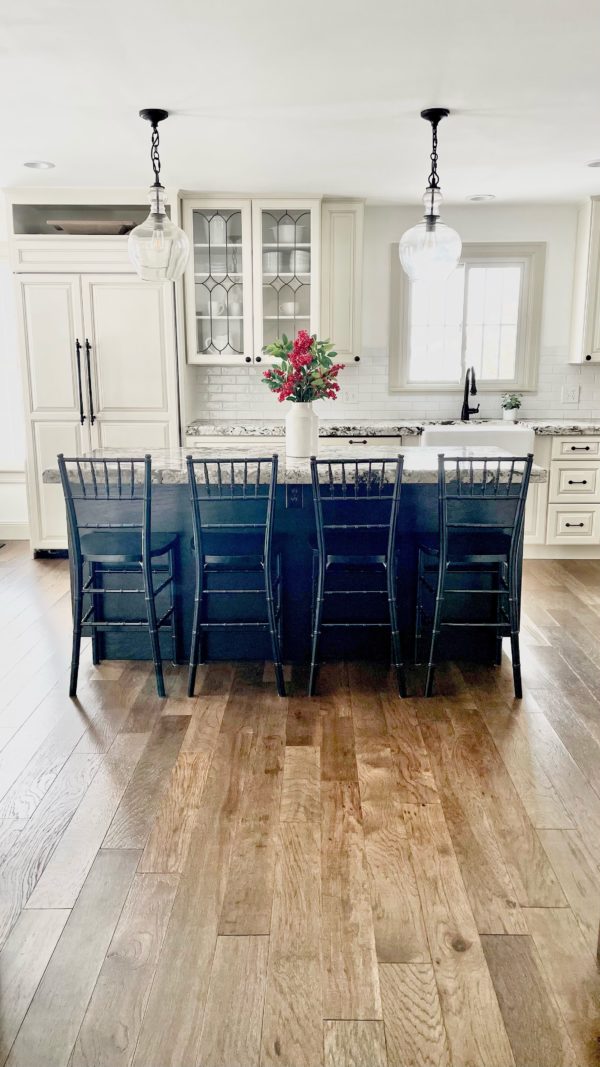 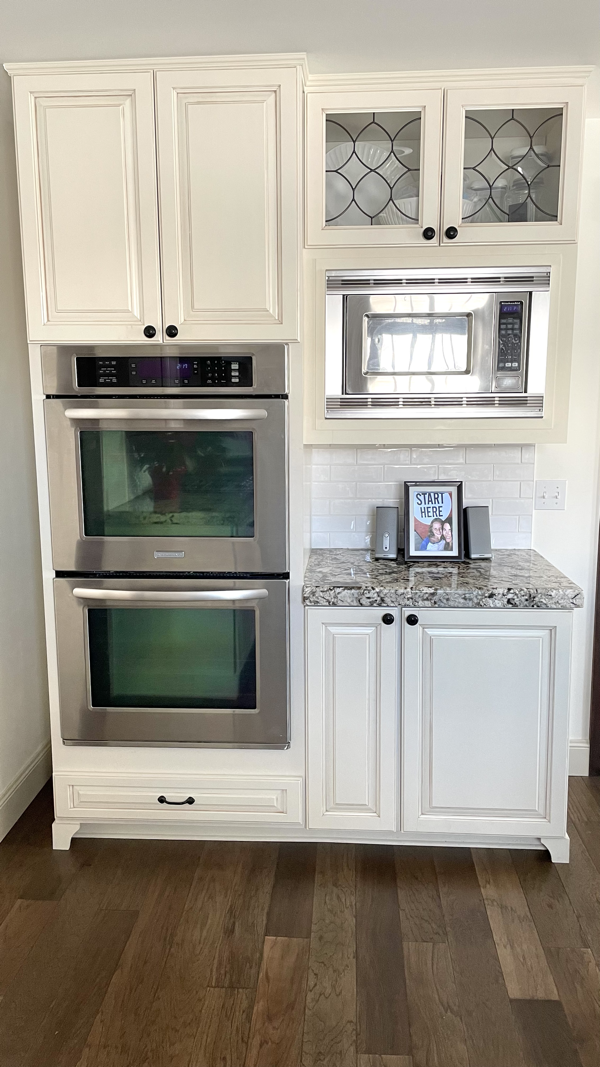 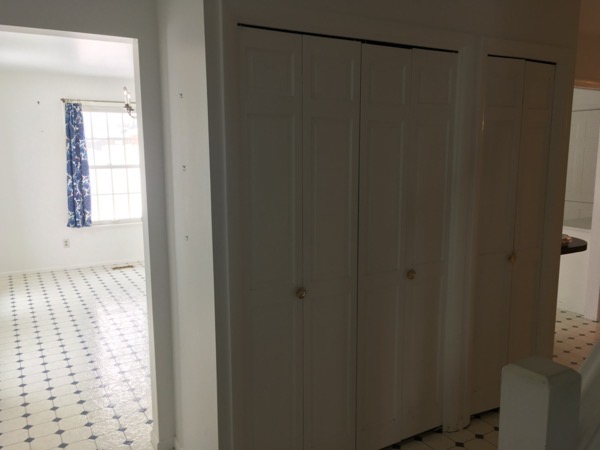 The vent hood I made for the kitchen cost me less than $50 (not including the fan).  I found this vent hood for free on the classifieds.  It is beautiful but didn’t fit the style of my kitchen. So I used it as the carcass that I would build over. I covered it in sheetrock and wood. Finally, I added the wood trim. 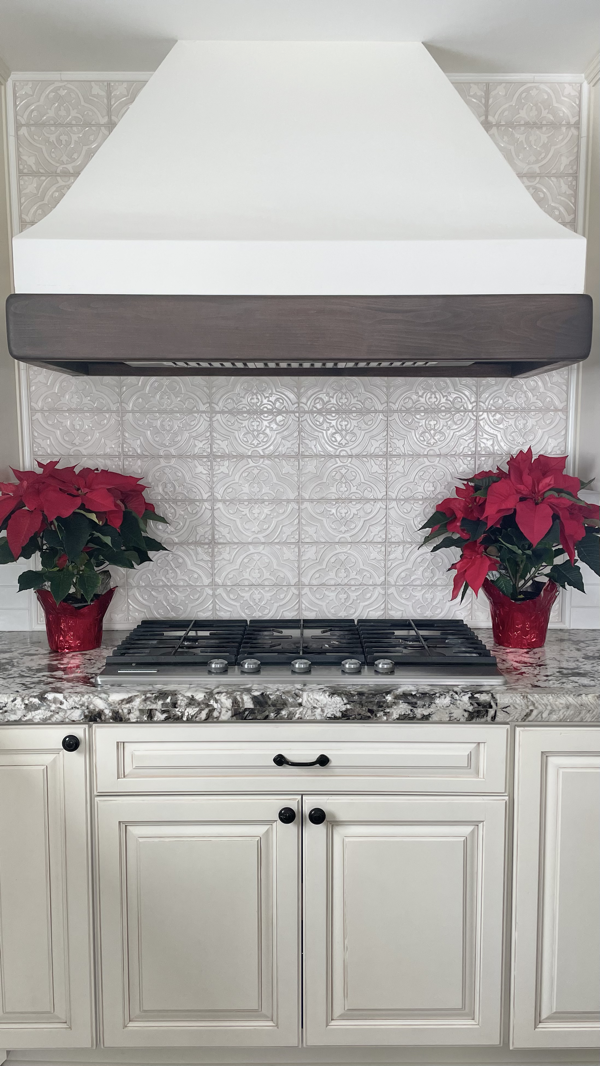 Many of you asked in my last post how long it has taken me to remodel these rooms.  THREE YEARS!!!!  It is no joke remodeling the house that you are living in while having five kids.

Disclaimer!!!  My kitchen never looks as clean and uncluttered as it does in the photos!  I had to close the kitchen to all kids and my husband to clean and get rid of all clutter!  There was protesting and crying.  It was not pretty:).  So for five beautiful minutes, while I was taking these photos, my kitchen looked like this.  I will cherish these photos because it will never look like that again :). This is what my countertops usually look like! 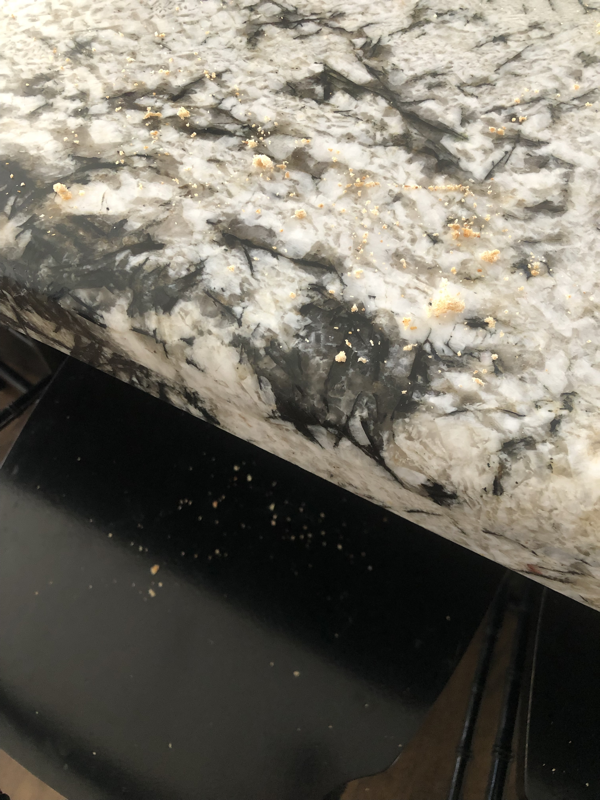 Thanks for reading!  Hope you have a great Christmas!!! What has been the best part of your day so far?

Staying home for the holidays or will you be gone this week?

Ever shop on classifieds?  Any cool finds?

Beck is having his tubes put in as we speak… I’m so excited for him to feel better!

Letting my lungs adjust and a small favor! 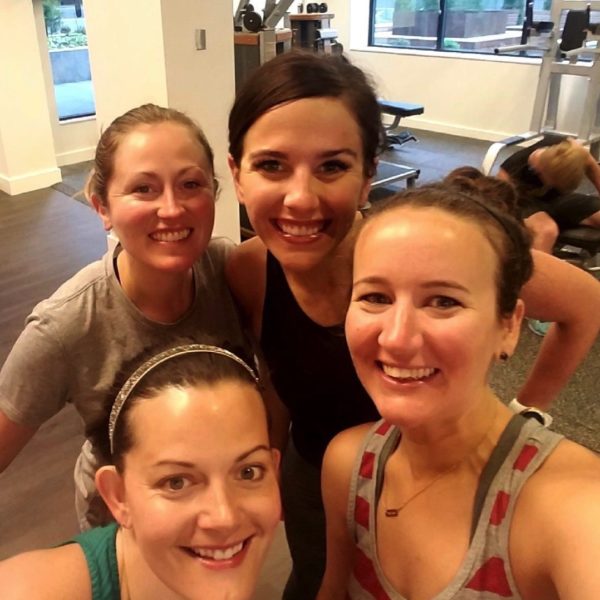 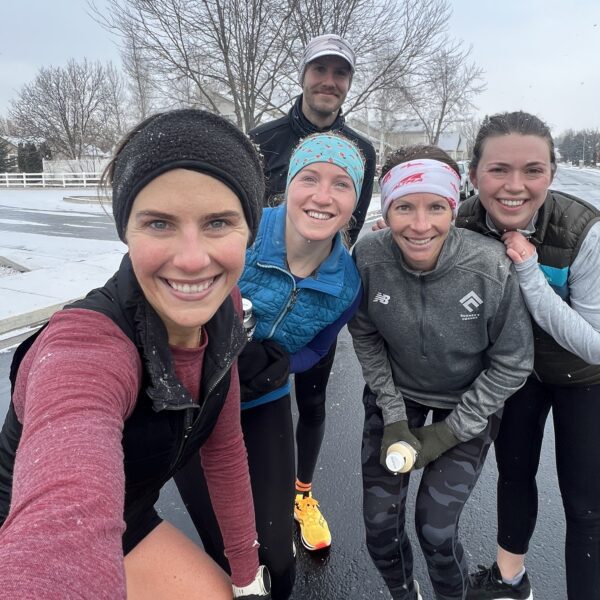 I (contractors) am remodeling our house next year. What is the flooring? Enjoy the clutter bc before you know it the kids are grown and flown.

The flooring is Hickory color Henna by Regal Hardwoods. Good luck with your remodel!

Stunning! You are so talented! I am in awe! Your home is beautiful.

This looks amazing. I don’t know if I’m more impressed with all the work or all the patience waiting to finish. I could never!

Good luck to Beck!!! Can’t wait to hear what a difference the tubes make for him.

The kitchen is gorgeous! Your sister is amazingly talented!

I am going home to Arizona for kitchen, flying there today!

It’s beautiful. Fantastic job.
How did you learn how to do all this ? I love the idea of DIY’ing some projects but I’m (lets just say) not that handy.

❤️ the countertop on the island in the kitchen

Good luck Beck! Your sister has skills! Her kitchen is gorgeous. I love the range hood!

Just…how? It’s incredible. I’m so blown away by this!!
The floors are GORGEOUS too.
And ahhh wouldn’t it be nice to not have all the clutter??????? :)

Wow honestly it is so inspirational that you take these remodels on yourself! I’m proud of myself if I change a battery that requires a screwdriver! Haha you’re amazing!!

Good morning, Janae!! So, so happy Beck is getting his tubes today! Hopefully, they make a world of difference for him (and you & Andrew).
What a gorgeous kitchen!! I always treasure the brief moments in time when my kitchen is clutter free and looking very photogenic :o)
Before I met my finance (yup, engaged last week!) and even after we got our house together, we have scored So. Many. Things. on FB marketplace and this electronic bulletin board I have at work. Someday, I’ll try and figure out everything we have gotten and how much we saved that way. Everything from a treadmill to furniture to kayaks to vacuum cleaners to plants & gardening supplies!!
Wishing Beck a quick recovery from his procedure and a winter that is free of ear infections. Have an awesome day, Janae!!

Thank you for sharing Hungry Runner Girl Sister.
Amazing.
Merry Christmas to your family, too!

Your sister’s kitchen is gorgeous. Way to go–that oven hood is ESPECIALLY impressive. And I love that she included even one photo of the tedious moments.

My BIGGEST memory of the classifieds was before craigslist became a thing and before monster.com (and the variety of job search engines that have more recently emerged and become popular) became a thing, searching for jobs in the late 1990s and searching on the classifieds as much as on “this new site called monster…” for jobs. Man. That was a literal lifetime (or two) ago. NOW, though–I’m grateful for LinkedIn. ;)

The best part of my day so far? It’s only 10(ish) AM in Atlanta, but my 5:30 AM Les Mills Sprint class was AMAZING. I was nervous getting to the gym, because my back has been worse than usual lately (sciatic nerve flare up and some pain and frustration up and down the posterior chain from a few chronic things in my right hip and right knee), AND because I have an incredibly sore throat and I fear the start of a sinus infection. (And of course I chose an especially hard release to teach and had to cram choreography yesterday afternoon to remember it all) BUT, everyone worked hard, seemed to pay attention to my coaching cues, and left breathless and feeling like they got a BIG workout. So: easy highlight right there!!

You also asked about the holidays. This year Tom and I are driving to central VA to visit his aunt and grandma (who live there), and his mom will drive down from NY state. But here’s the great thing: we get to drive up the day after Christmas to lessen some of the commotion and overwhelm with a lot of young grandchildren to worry about on Christmas day. We can drive on up right after and give Tom’s relatives a much more relaxed and low-maintenance few days with family. This also means that we get Christmas day to ourselves in our apartment (our happy little bubble…). And we have plans for the traditional meal (prime rib on Christmas evening and a really good cheese and charcuterie board in the middle of the day while we watch a movie marathon of some sort…) and a VERY low-key day hanging out in pajamas and doing a whole lot of nothing.

I hope you all have a great day and that whatever your Monday workout is–running or peloton (or maybe back to Yoga with Adriene?!?), that it is exactly the right thing for you. :)

Sissy… You are a remodel rockstar!! And I love that you did the work! I think I mentioned this in your last post, but you have convinced me to check the classifieds for everything when we start our kitchen. Such an incredible deal on the cabinets and appliances! So, so good!
Keeping Beck (and Janae and Andrew) in my thoughts and prayers today!!!

Wow!! So much more natural light now! I love it!
I totally relate to the kitchen cleanliness even though I don’t have any kids. I think the longest my kitchen can stay spotless is if I clean it before vacations ;)
Happy Monday and good luck to Beck!

I LOVE this!! I also remodel homes and it’s a LONG hard process! This is beautiful, she should be so proud!

Tremendous job with the kitchen remodel! It has such depth and warmth now–love it!
Hope Beck has a very smooth tube procedure today and feels a ton better quickly.
Home for Christmas with grown kids coming into town Wednesday night :)
Oh, best part of the day so far is shipping notification for a last-minute gift, LOL.

Once again I’m asking if your sister is available to hire for her services lol. Amazing deal on the cabinets and appliances!

Highlight of the day so far – someone tried to use my credit card to buy stuff (not a highlight because boo fraud) but I’m supposed to drive to Chicago tomorrow so I’m grateful it didn’t happen while I was on the road!

All the best to Beck today, hope he feels so much better FAST.

wow!!!…..you have time. Funny thing, I started remodeling our main bathroom before I did my first Ironman in 2009, it’s almost done…….my wife hired someone to do our kitchen….and she tiled the bathroom…I’m almost done, and it’s almost time to remodel again///

Absolutely stunning! Your sister is so talented!!

Your kitchen looks beautiful. I love reading about your remodeling because it is done on a reasonable budget unlike so many unattainable (and over the top) renovations that you see on social media. I also love that you are repurposing items that could otherwise end up in landfill. Big props :).

The kitchen looks amazing! I can’t believe what a great deal you got on those cabinets, when you were able to put the work in it! Did you already know how to do a remodel? Where did you learn?

Amazing kitchen remodel!! I love it!!

HUNGRY RUNNER SISTER!! Okay…..WOW!! I am speechless. My jaw literally dropped at the before and after. I am so impressed!! My husband is a contractor (mostly carpentry but can do whatever) and I know how much work and dedication it takes to do Renos, and it seems to be such a rare thing for women to take on this role – so inspiring!! You did amazing. I love the style so much, like exactly what I would choose for myself. COME DO MINE NEXT!! Lol

BECK – thinking of you, good vibes baby boy… you will do amazing and get through this!! Stay strong mama, you got this.

Wow! That is beautiful and classic. I love the table in the kitchen. I’m looking at new dining room tables and so many have little grooves and I find them so annoying when cleaning the table.

I actually got rid of a table that I otherwise liked because it had grooves on the top and I couldn’t handle all the crumbs that constantly collected in them.

I am SO impressed by this and your last post! I have a question for your sister (or maybe a guest post idea?). How did she get back to strength training after all her kids and her back surgery? I have an 8-month old and am having to really focus on strength training in order to combat the aches and pains I have from holding her.

Love, love your kitchen remodel! You are an inspiration. I could never do this myself but so happy to see your successes. I really like your island light fixtures. I have been looking all year for something like them. Do you know the brand name for your island lights?

WOW! You are so talented!!