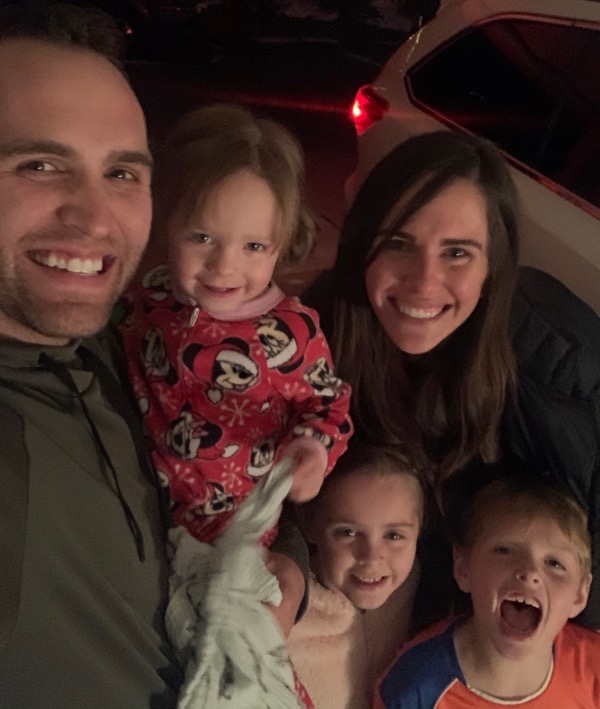 I hope your week has been amazing so far and I’d love to hear what you’ve been up to!

For today I am sharing 15 scenes from our Christmas.  I didn’t run yesterday yet by the end of the day I passed out into bed haha… Christmas took every ounce of energy that I had.

Skye feels like a big deal now with her Frozen ATV and because of this gift she finally likes Santa now. 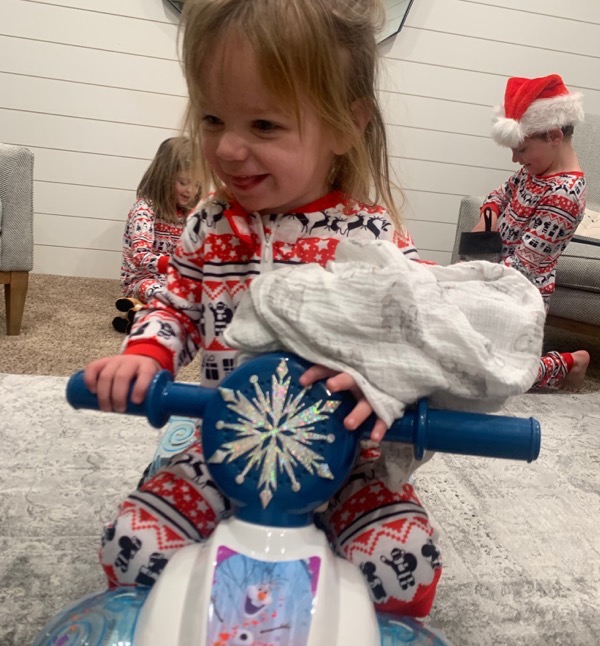 Brooke and Knox have been begging to go skiing and it’s been SO hard to keep this secret.  They were so happy when they opened them up. 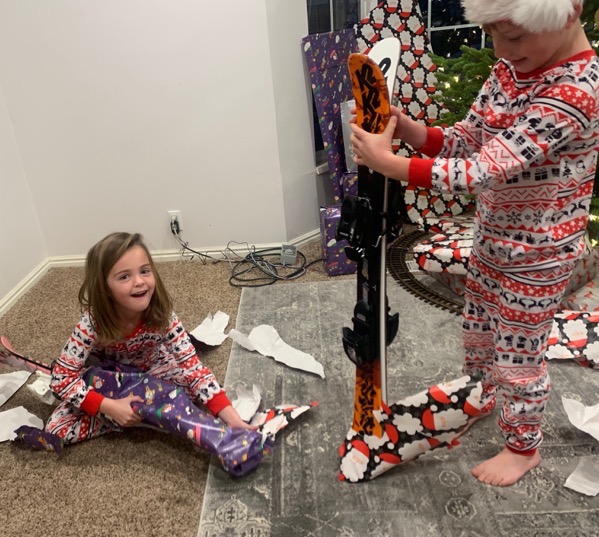 Utah gave us the gift of a white Christmas.  It snowed throughout the night and it was so pretty to wake-up to. 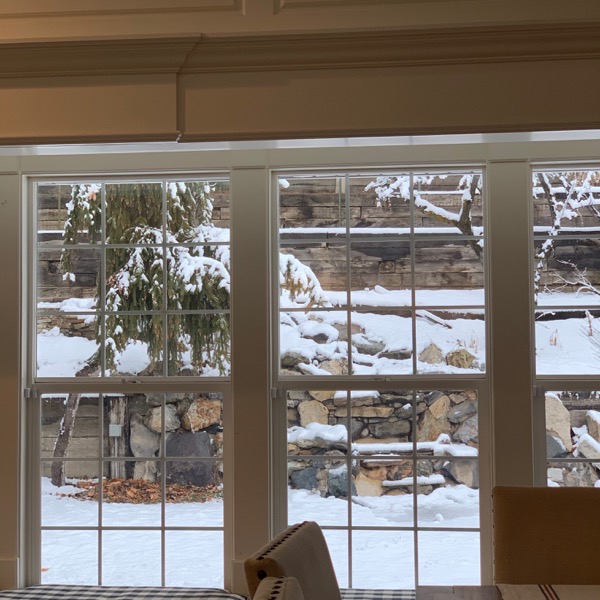 The kids voted for crepes and pizza for breakfast instead of cinnamon rolls so that is what we ate.  Andrew and I ordered a pizza at 10 pm the night before and ate while we finished up everything and then the kids had the leftovers of that pizza in the morning.  Probably the most random combo for breakfast but they loved it. 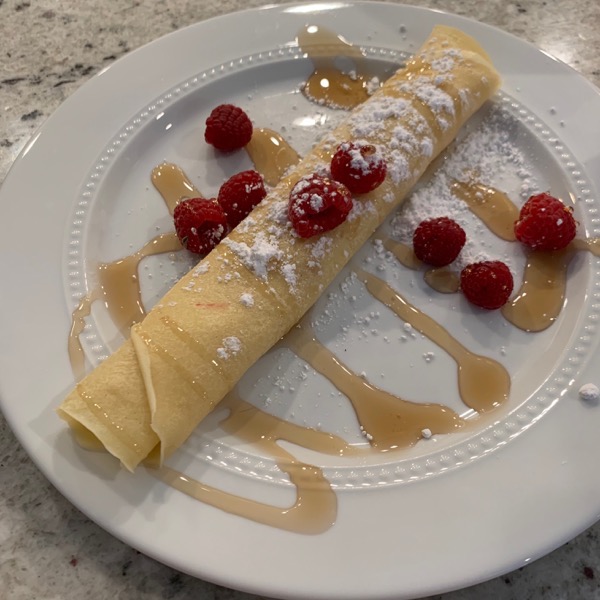 After a lot of playing we went over to my parents’ house and opened presents with them.  We then put Skye down for her nap… 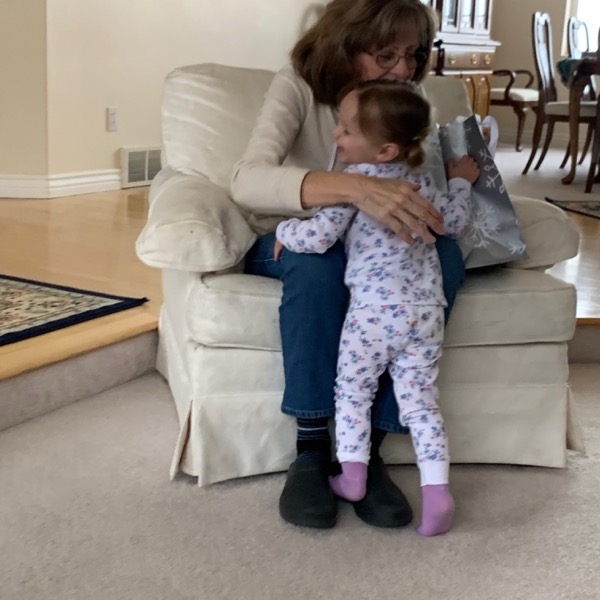 And took the big kids skiing for the first time.  We are going to ski with them a few more times before attempting to take all three on the same day. 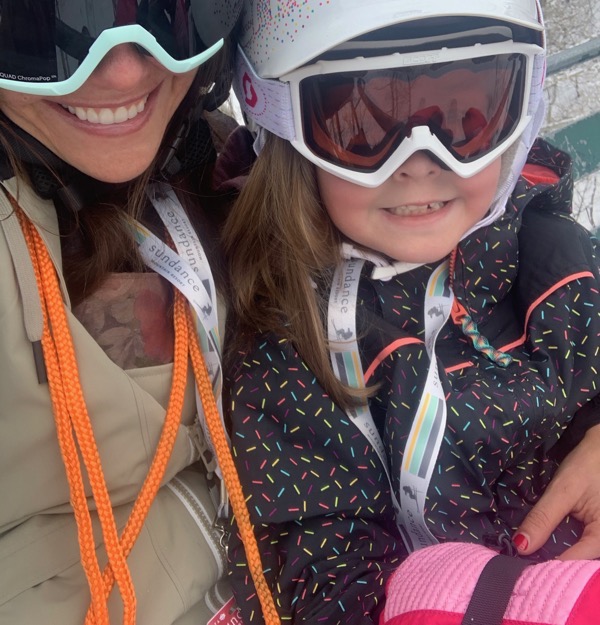 That little rope made it so much easier to take them for their first time. 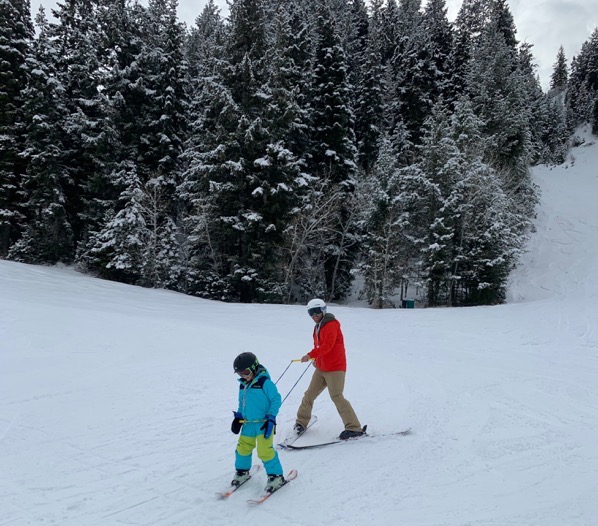 They did so much better than we even expected.  So excited to have this family activity to do together and it’s so close that we were back in time to get Skye when she woke up! 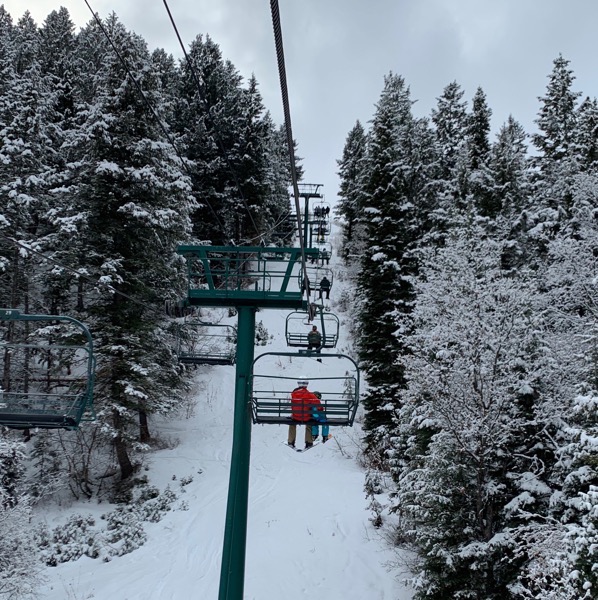 Knox told me he wants to be a Skiing Blogger now when he grows up. 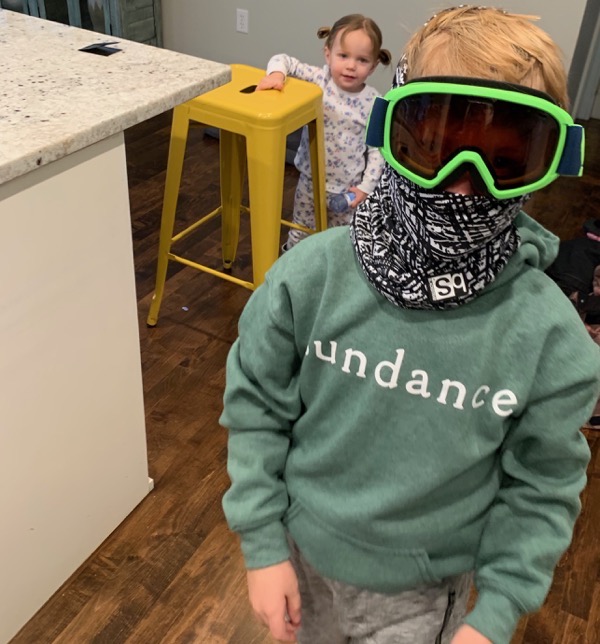 My sister had everyone over for dinner last night. 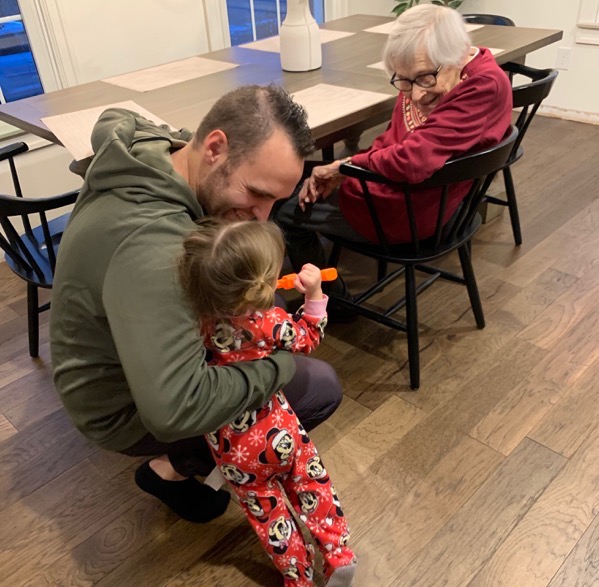 She made pizzas and my mom brought lasagna so it was the perfect meal! 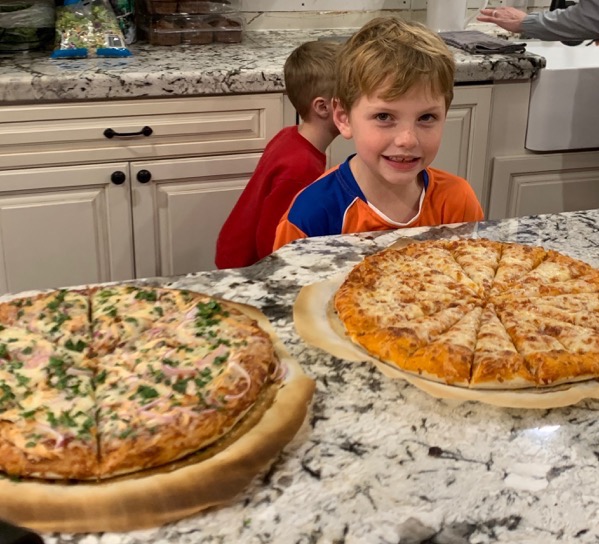 It was a great day and I’m so thankful that we were all able to be together.

I’d love to hear about your week so far! 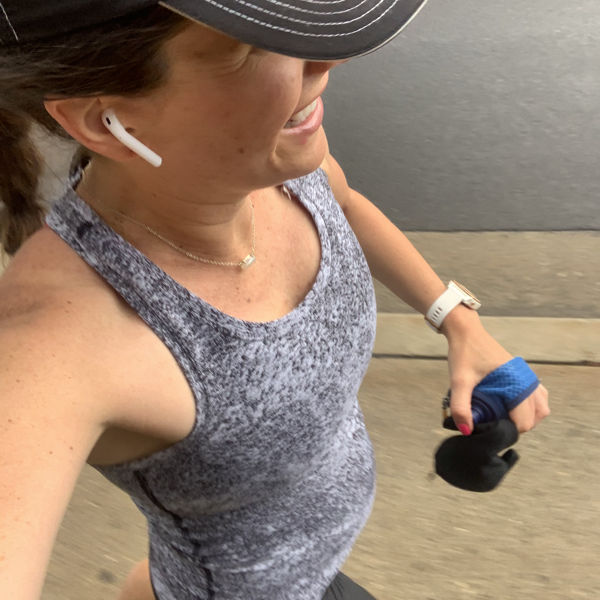 Sounds like you had an amazing Christmas! Ours was very low key. I did get in a less then 30 min run to just get out of the house and it was gorgeous. It was sunny and in the high 40s here which is warm. My girls really want to go skiing so I need to find someone who knows how to ski to take them!! My brother in law skis a ton and was a professional snow boarder so I keep hinting!! On to setting up a playmobil hospital with a MILLION pieces. My 9 year old was almost in tears when she opened it up and said “ all I want to do is play with it”, ha!!!

Your day sounds perfect! Low key is so nice and I’m excited for your girls to ski! Hahaha your brother in law needs to take them! Tears… what a sweetheart and I bet she is in heaven today playing with it!

holy cow is that a big busy day!! so impressive. glad you had a good day ! merry christmas.

Hahaha we were all so exhausted by the end! Merry Christmas to you too. Hope you are having a beautiful day, Krista!

Thank you for sharing your day! I love reading and hearing about the activities of your family :) Merry season!

Amanda, thank you for your friendship over the years! I hope you have a really great day!

Merry Christmas to you and your family!
I was way too excited to run outside in a short sleeve shirt and capris on Christmas (in Wisconsin)! It was a gorgeous day!

Merry Christmas to you! Short sleeves and capris in Wisconsin.. that’s amazing! I hope you are having a wonderful morning, Teresa!

Have you ever shared your sisters pizza crust recipe? Can you pass on a link if you have the time? They always look SO good! We use Trader Joe’s pizza dough which is really good, but your sisters looks fantastic!! Merry Christmas and Thank you!!

Hey!!! So she just goes to Sam’s Club to their food court and buys it from them. It tastes so good! Oh I love the TJs one too! I hope you have a beautiful day, Leigh!

We are going to be getting my kids into skiing this year too! They’re 5 and 2. Unfortunately (but also fortunately) its 60 degrees in Ohio right now so the little resort near us is closed. Hoping an annual family ski trip will happen for us in the future if the kids take to it! We aren’t quite as lucky to live by a mountain haha.

Pizza for Christmas sounds like a great idea. I made a breakfast casserole and the kids didn’t touch it ?

Sara! You will have to keep me updated with how they do with it! I hope that you guys get some snow soon! Come take your trip to Utah PLEASE! Hahaha I think I’m finally learning nobody will eat the things I actually spend time on;) . Hope the casserole tastes even better today for you;) . Have a fabulous day!

Sounds like you had a packed day, but wonderful that your family was together. Thanks for sharing all of your great stories! We’re visiting UT this week just north of you and took full advantage of the white Christmas skiing at Powder Mountain. Heading to SLC today with perhaps a stop to do some nordic skiing. :)

HILLARY! YOU ARE HERE! This makes me so happy! We are hoping to go to Powder Mountain this year with Andrew’s dad. Hope you have fun nordic skiing and you’ll have to let me know where you eat in SLC.

I’d love to hear how you’re teaching the big kids to ski. We really want to teach my daughter without paying for expensive lessons, but I’m scared to attempt it myself…

Oh don’t be afraid! Kids really do pick it up so much easier than adults do. Find a place with a great bunny hill so they can really start small. The rope helped SO MUCH! It made it so that they didn’t fall really and I could make sure they weren’t going to go too fast or in the wrong direction. Kids do really well with the ‘pizza’ formation to slow them down but it will be exciting when they can start turning. Here is the link to the rope

Brooke and Knox are taking lessons tomorrow because I want them to get a few hours with somebody that really knows what they are doing ha but I think just once is all they will need. I hope you have a great day and let me know when you take her… what a fun thing you will have together!

Thank you! We’ve been following their progress on your IG stories! I’m worried that I’m not good enough (or strong enough for that rope!) but you’re right, kids pick things up quickly.
Keep us posted via IG on their progress. Skiing is such a great family activity, I can’t wait for my daughter to be able to join us!

Merry Christmas! We bought the girls skis as well!! They’ve been a couple of times and were super excited and totally surprised! Looking forward to a weekend of family skiing in Northern Michigan this weekend. :-)

AHHH MARY! That is going to be the best, enjoy every second this weekend. Let me know if you guys ever come out to Utah to ski and we will meet you at Sundance:) .

Hi Janae! My week so far has just been lazing around and hanging out with friends! This weekend we will all get a big Airbnb and hang out and go snowshoeing!

That sounds PERFECT! I’m glad you’ve been able to take it easy this week and you will have so much fun snowshoeing. Enjoy!

Looks like you had such a great Christmas! I’m going skiing this weekend and cannot wait! It’s my favorite part of being in utah that I don’t take advantage of enough!

Have so much fun skiing this weekend and you’ll have to let me know where you go! Seriously… skiing makes winter the best here:) .

What an awesome day and so so so busy for you!
Ours was low key which is my kind of Christmas. Didn’t leave the house but managed to get a tabata/strength workout in before the kids came over (they spent Christmas Eve at their dads).

Oh low key Christmas are the best! We were all exhausted by the end ha. Glad that you were able to spend the day with your kids! If you have a Sam’s club you have to grab their pizza dough… SO GOOD! Enjoy that pizza!

I love Sundance. We haven’t been there with our kids yet, but this summer we are planning a big trip to Utah/AZ and we are spending a few gays there at the start. Can you share your crepe recipe? Or a link if you’ve already posted it. Love your pics!!!

Hey Jeannie! Oh you guys are going to have the best time this summer on that trip. You’ll have to let me know everything that you do! Yes, of course… it’s our favorite and we make them once a week at least haha:
https://www.sweetashoney.co/french-crepes-recipe-easy/

Have a great day!

How cute are those kiddos in matching PJs?!

Love that UT sent you snow for Christmas, we didn’t get any here in CO but the mountains have plenty so we will survive.