You know when you get to this rock that you have officially survived 480 ft of climbing in just 1.4 miles.  My legs were seriously dead at this point and I was so happy to have this rock to sit on.

Gorgeous morning with most of the miles on a paved trail and some of the miles on the dirt.  I really love doing both the dirt and the road in a long run because it really changes things up. 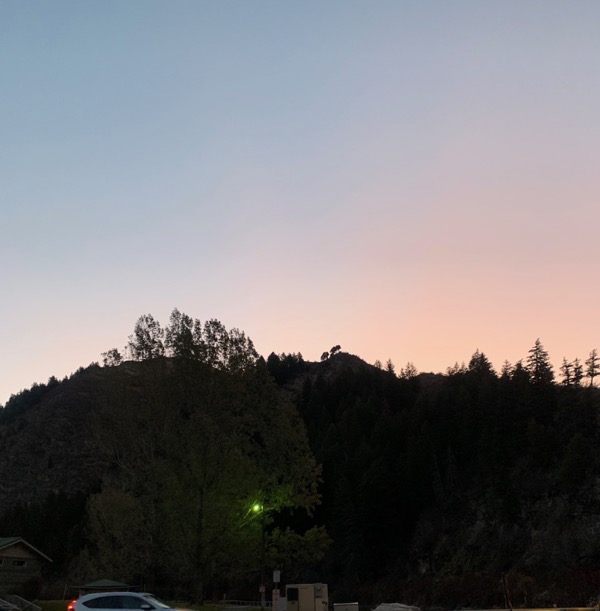 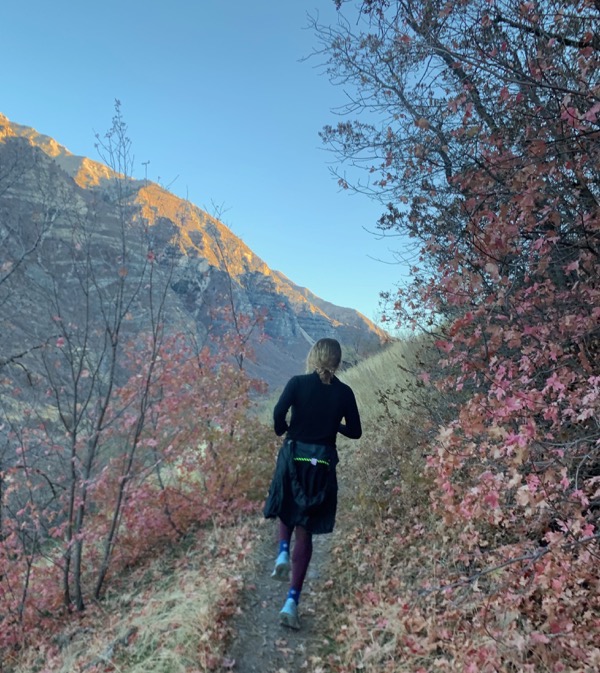 We were on the same trail as the Haunted Half (the race started later on) so it was fun to see all of their decorations out.  They also had baskets of candy out at the aid stations and they sure looked good! 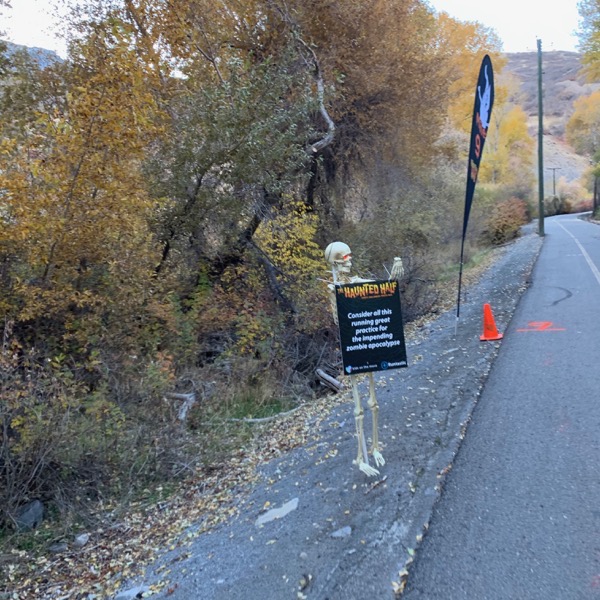 Skye found some of Brooke’s clothing in the laundry room and put them on all by herself.  I think this was her way of telling us that she missed the big kids yesterday. 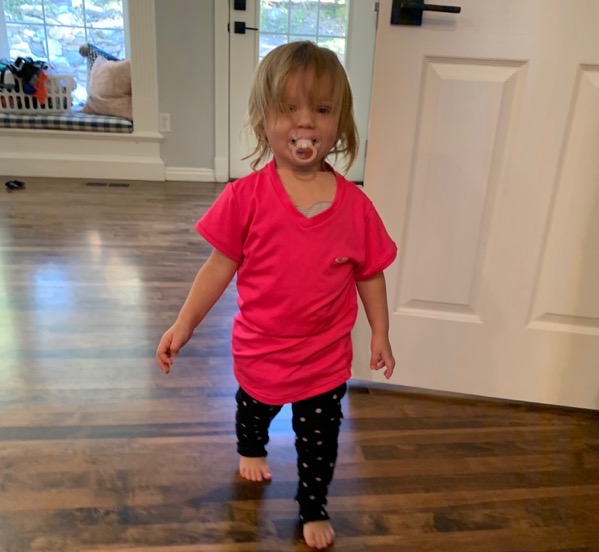 The best part of the day—> Andrew and I went out on a date to see Thriller! 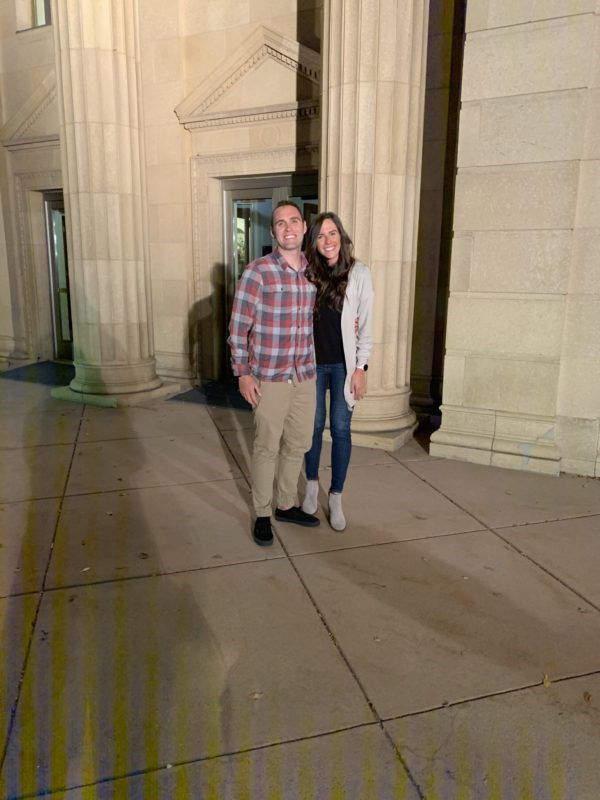 This is how last week looked!  Lots of miles and some time on the dirt too.

Wednesday:  14.33 miles total with a workout on the trails… FAST on the ups and smooth on the downs.  Fun to get in a workout on the dirt and base the workout off of effort rather than even thinking about splits.

Thursday:  11 miles @ 8:35 average and my legs were feeling every single one of the ups and downs from the previous day.

Saturday:  16.24 miles @ 7:48 average and 919 ft of elevation gain.  Tempo miles were in the middle with some marathon pace miles along with jumping on the trails for 1.4 miles of STEEP climbing at a hard effort.  I was toast by the end of this run.

71.08 miles for the week.  The week after St. George when I was taking time off I was not sleeping well and then as soon as I bump my mileage up again… NOTHING besides an alarm clock will wake me up during the night now ha.  Back to my normal need for 9 hours of sleep a night!

Also, next week I am predicting a treadmill run or two!  We are supposed to have lows of 9 degrees this next week.

Oh and one more thing, with the temperature dropping do you guys feel like you need to carry a tissue with you on your runs?  We were talking about that yesterday because our noses run like crazy lately!

What was your best run last week?  Hardest run?

What do you have going on today?

We Belong–> Chatting about My Pep Talk to Myself 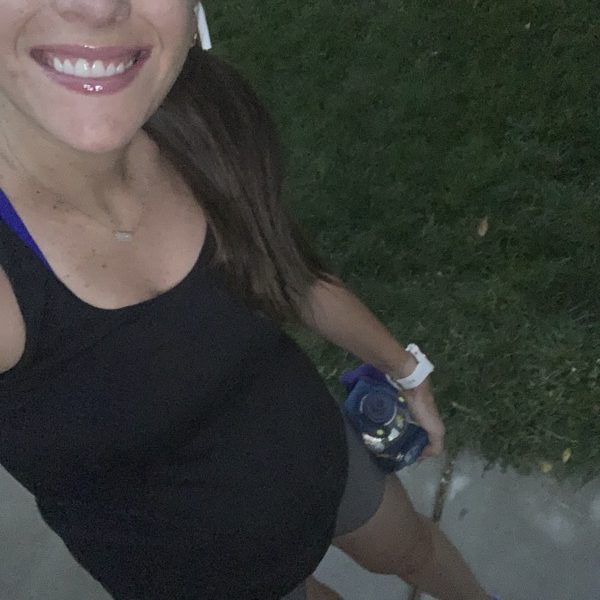 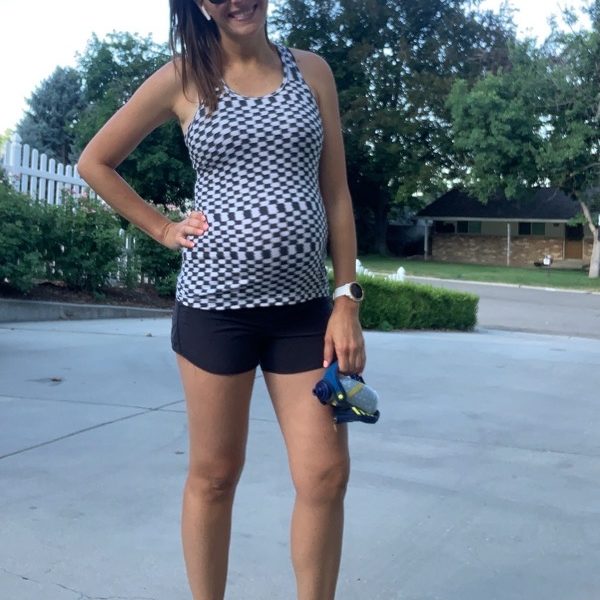 Back to Teaching + Friday Favorites!

I love how Skye keeps dressing herself! What a strong independent woman you are raising!

We are just getting to the point where we don’t have to run the air conditioner at night (it was a high of only 72 yesterday), so no runny noses yet. I even have A Halloween theme tissue pack and haven’t had the need to use it! But we are really enjoying this fall weather so I won’t rush it!

She definitely knows what she wants! HIGH OF 72 yesterday… it’s snowing here so I might just come stay with you the next few months! Keep enjoying your weather and I hope you have the most beautiful day Tonya!

No tissues – they make me feel like a litterbug when they accidentally fall and blow around. Runner’s TMI, maybe, but if it is just random drips from the cold (not full on “I have a cold” snot), I just use the edge of my sleeve or glove and throw them in the wash at the end of the run.

I will be hitting up the treadmill, too – we have 4 days of snow and ice in a row predicted with daily highs dropping into the teens by Tuesday/Wednesday. Blech.

Never TMI with us! Yes… that’s what I usually do too and it’s working so far! Oh noooooooo 4 days of snow and ice. Not okay. It’s snowing here right now so I think I’ll be on the treadmill for a good amount of miles this week! Drink lots of hot chocolate!

I LOVE your pep talk to yourself! Such good stuff!

You worked hard this week! My favorite run was mile repeats (something very strange must be happening to me ?) and my hardest run was a 10-miler. I was a little disappointed with how out of shape I felt, and it concerns me because I have a half coming up in a few weeks… Oh well.

Church today, then dinner with friends, then finishing up all sorts of odd jobs before another busy week at work.

PS Do you wear your Garmin and keep track of your step count on rest days? If so, how many steps do you usually get? Do you aim for a certain number of just not worry about it?

Hey Leah! I accidentally published that post today when it was meant for tomorrow so it will be back up tomorrow ha but thank you so much! MILE REPEATS… those are hard and you rocked them. They probably made your 10 miler feel hard because you were recovering from them! Enjoy church and dinner with friends, sounds great. I do not keep track of my steps but I’m guessing they are a lot by the end of the day. I just love my new garmin so I wear it all day long!

Thanks for telling me mile repeats made my 10 miler harder. That really helps me to relax a bit! I bet you get a ton of steps, too, because I got almost 24,000 yesterday, and my long day is like your easy day, haha!

Today I finished my goal of running a race in every town in Connecticut (there are 169!) I got to run with some of my best running friends who I’ve met along the way- also going after the same goal (it’s a club). But I’ve run everything from a 5k up to a marathon to accomplish the goal!

ALICIA!! I remember you telling me about this goal. YOU. ARE. AMAZING. Huge huge congrats, absolutely incredible. I hope you turn this into my running accomplishments post;) . Have the best Sunday and congrats!

Best Run, an inter club handicap race on the weekend. You would love these races. You show up and the person in charge of doing the handicaps has worked out everyone’s estimated finished time based on recent races and their Strava Stalking. So you have staggered starts with those predicted to take longer getting a head start and ideally we should all finish at the same time. I’m 4 months pregnant so got a generous handicap and managed to win my clubs trophy for the race. I loved how much fun it was and how everyone encouraged one another. Sometimes we get so caught up in racing we forget that running is meant to be fun.

Oh I love this so much! What a blast Hinano and congrats to you!!! I hope you are feeling well and seriously such a cool idea! It really is meant to be fun… just the reminder I needed!

Since we’re on the tissue topic and not holding back… when I lived where it got cold (or in the short lived slightly chilly “Florida winter”) I like to keep a paper towel or two in my pocket. They’re sturdy enough to last for the entire run or walk and less likely to get lost (since you only have 1 or 2). I’ve considered getting all fancy and going with the environmentally friendly old school handkerchief or bandana but…just can’t do it. Yet…

LOVE this idea. Going to copy you… thank you so much!

Hey girl! Your jeans are so cute in that date night picture ? where are they from?!

Thank you SO much Kelly! They are from Madewell a few years ago. They always have my absolute favorite jeans. Have the best day Kelly!

I need a tissue on every run not matter the weather! It is really annoying. I run with a bandanna in my hand. But it is nice on the heat as I run with a wet one or even a frozen one.

I am ready for cooler weather (it’s been consistently in the 60s here though I ran in 44 degrees this morning – it was awesome! But I am ready for high 40s. But not ready to run in sub-32 degrees.

Oh that must be so annoying Jessey, I am so sorry! I feel like my head is just draining the entire run in the cold. I hope you get that 40ish degree weather soon. Hope your Sunday has been amazing!