I’ve got one blurry picture from yesterday’s run.

I don’t think I actually woke up until about mile 11. 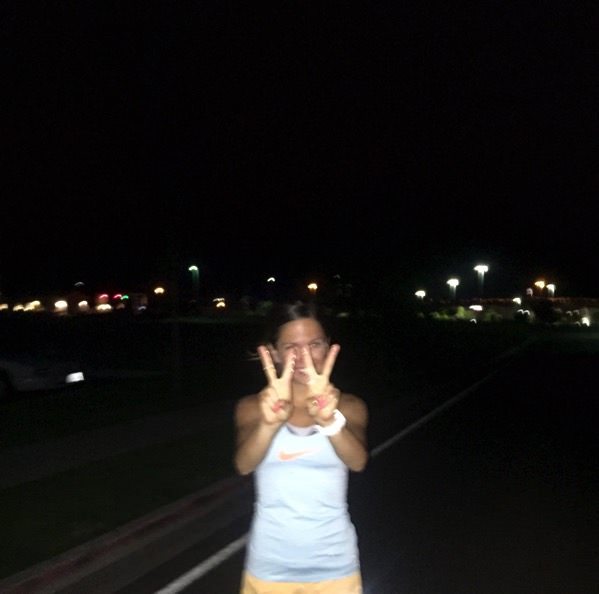 The run yesterday was the longest that I will do before the marathon.  My coach said to stick between 7:30-7:45 average pace… so I did a 7:29 average pace because it brings me great joy to come within a second or two of what he tells me to do.

I didn’t do too many hills (a total of 650 feet gained over the 22 miles) and my dad stuck with me until it was light out.  I need to dedicate this marathon to him.  He has helped out so much.

Last week’s 20 (pretty much the same course) was a 7:35 average pace and there was a lot of cramping.  Yesterday was longer and a tiny bit faster and it felt a million times better.  Part of the fun about running—>  you never know how you are going to feel during your run.

Only one more LONG LONG run (21 miles) before things cut back. 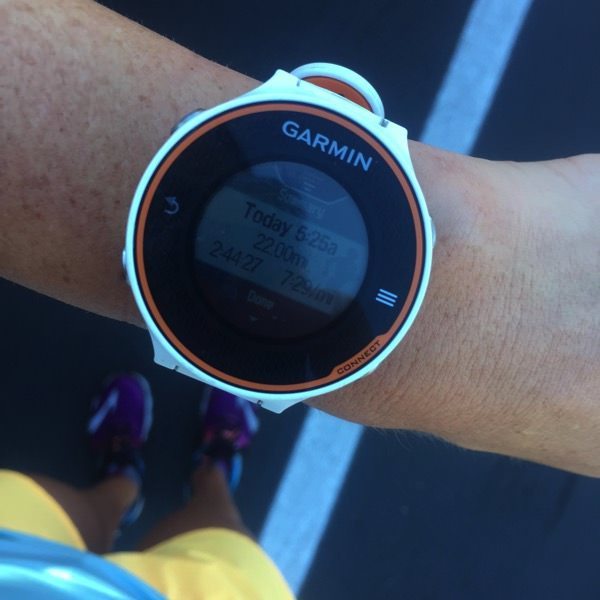 We got in some park time.  She went down this slide with her shark 400 times and I stretched out because I was quite stiff after I finished. 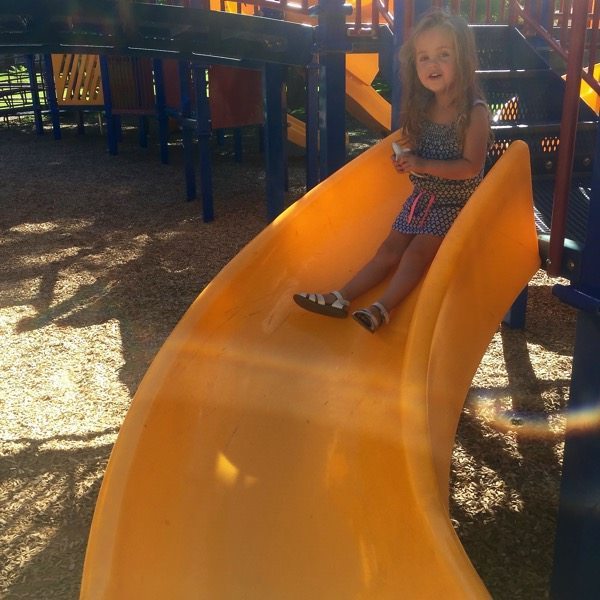 Fast forward through two lunches (long runs will do that to you) at home and 101 Dalmatians watching with Brooke and then it was time to head north for the Taylor Swift Concert.

But first we stopped for our chicken salads.  5 lbs of goodness in the tin. 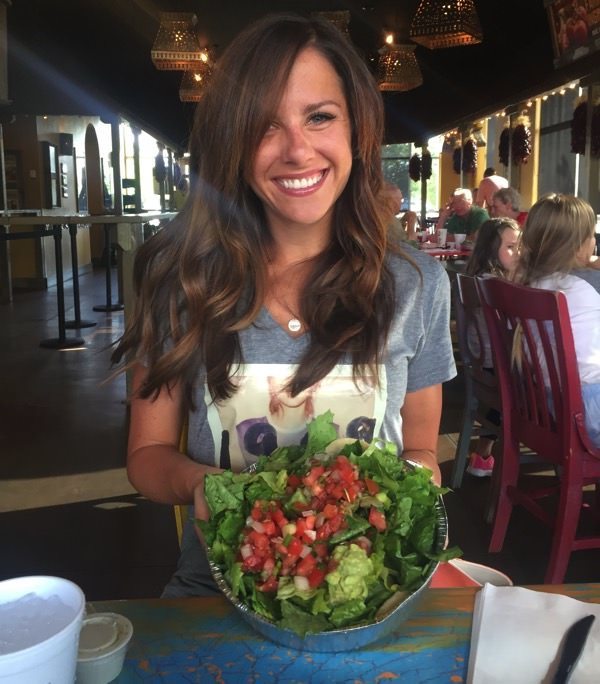 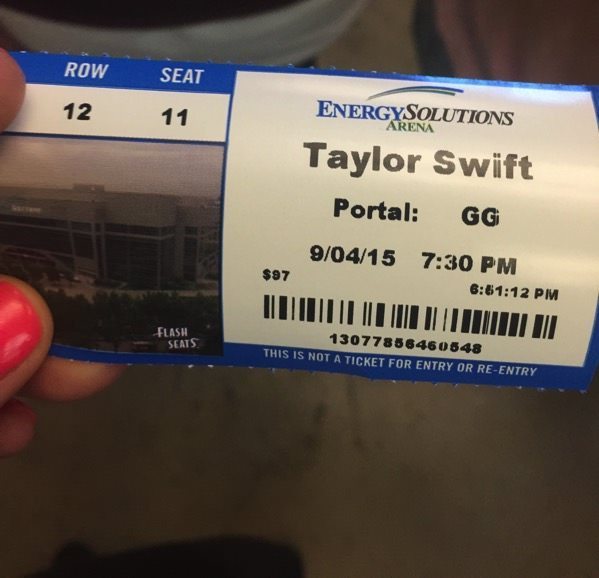 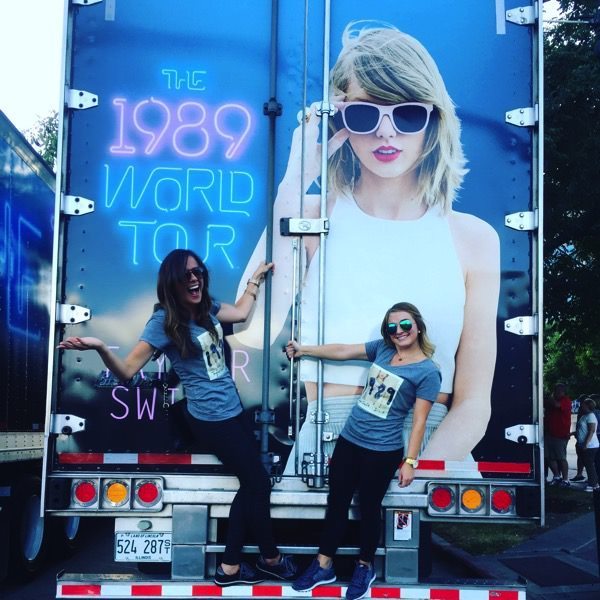 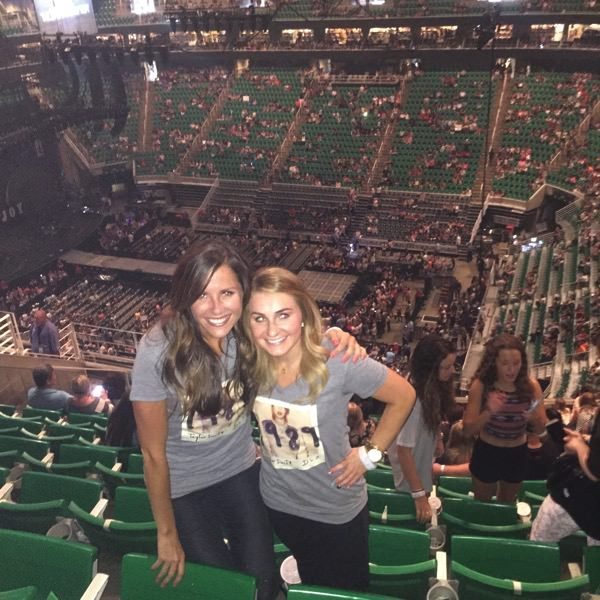 iron-on do it yourself shirts = much cheeper than buying shirts at the concert. 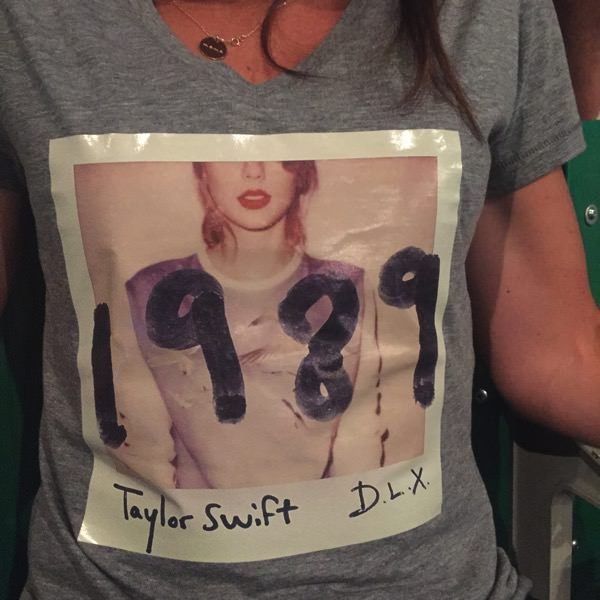 It was beyond amazing.  I loved every. single. second. 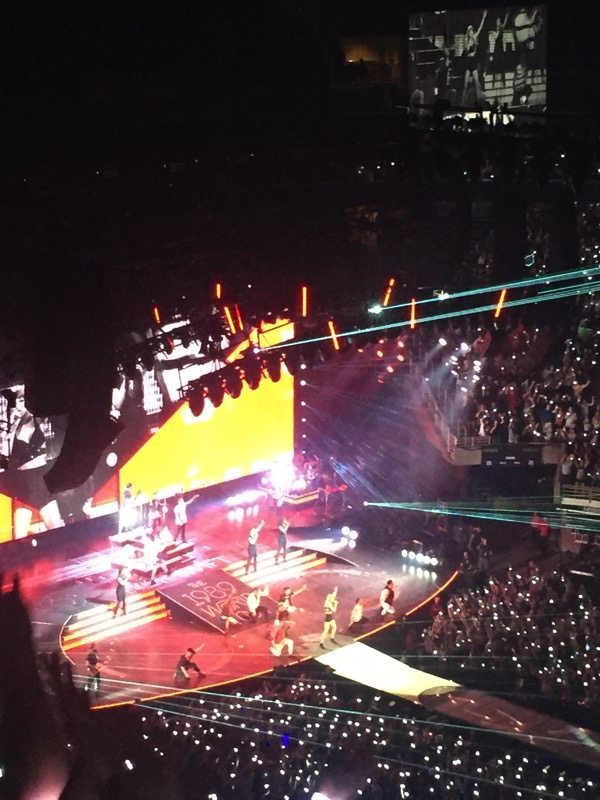 After the concert I went back to my parents’  house to pick up Brooke and eat pb gelato while telling my mom all about the concert—> just like we did when I was in high school:)

I hope you have a fabulous Saturday!  Get your run in and make sure to relax as much as possible!

What’s on your agenda for today?

A few things from our Thursday so far….

10 things from our Saturday. 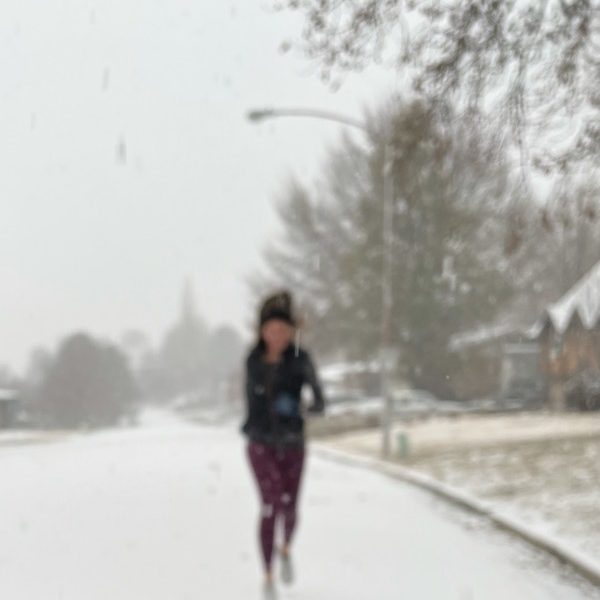 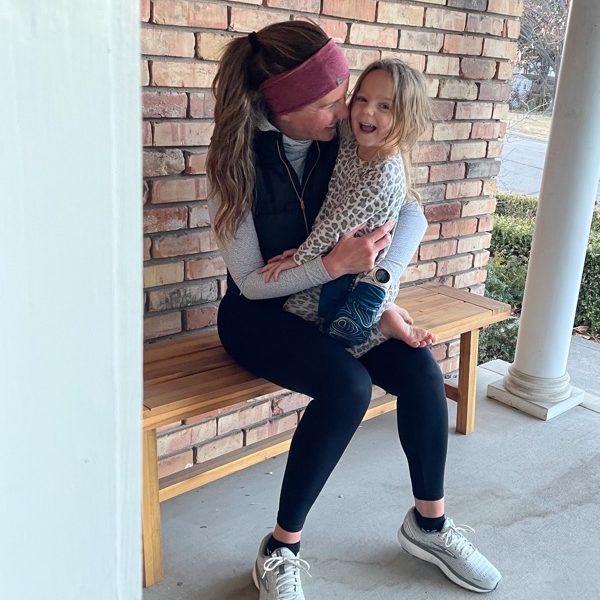 Great job on the run! I think any hard workout is always filled with anxiety. You never know what to expect or how your body will feel. Every workout is truly different.

Today I’m working out at the gym then heading to Scottsdale for some shopping and dinner with my Mom!

I’m jealous you got to see T Swift!

Today I’m working a half day and then I’m RUNNING!!

Stocking the fridge/pantry, walk with the dogs and son, picking up pizza for dinner, greeting my hubby after a long 6 day road trip he took for work!

I took my daughter’s to see Taylor with my friend and her kids and it was seriously amazing! So glad you had a great 22 – that is simply the best feeling! I just finished my 16 with some goal pace miles and it’s a huge relief.

Janae you are such an inspiration :) I channeled a lot of your long run advice during my 16 miles today!

Awesome job on that run! And yes to lunch 1 and 2, the story of my life lately!

More details please on how to do the iron on shirt! I am going to Tswift in October with my mom and it would be so fun to have matching shirts (for a decent price).

Hey Maria! So the girl I went with actually works at a printing company… she had the images printed their with the iron-on material. So we just ironed them on…

SO SO SO fun that you are going with your mom in October. Have the best time ever!

So glad you enjoyed the concert! I listen to so much Taylor on my runs. Yesterday was a six mile ‘long run’ as I begin a new half marathon training cycle?

I have so many things I need to do today. I really would love to have a run be on the list but I don’t know if it will happen.

The concert looked so fun!

I’m jealous you got to see Taylor Swift! Today is an easy run followed by a 10 mile hike in the mountains. Hope you have a great Saturday!

Kaella On The Run

Do you usually run over 20 miles during training? I’m running my first marathon in Nov and my plan only has me going up to 20. It makes me kind of nervous but I’ve heard adrenaline will get you to the finish line!!

I would love to see T Swift again in concert! I interviewed her back in the day when she was opening for Brad Paisley. She’s so sweet!

So jealous of the Taylor Swift concert! Who was her guest for the concert?

Did I miss the announcement of who won the Ray-ban giveaway?
Love me some TS :)

NIKKI!! I am so sorry that I forgot to post the winner but a girl named Allison won. Hope you have a fabulous weekend:)

Sounds like you had a pretty perfect day!!!! Wahoo!!! I just finished my 15 mile tempo run. Time to enjoy the three day weekend!!! Just finished the first week of school with first graders, I am tired!!!!!

Cute shirts!! And yay for your run :)

So glad you got to go to the concert. I can’t wait until she comes to Dallas next month!!

Am I seeing this right?? You finished 22 miles at 5:25am?!
So you started at 2:40am?! That is crazy early. I would think your dad would follow you all 22 since it was probably dark the whole time.
You rock!!! Such an inspiration.

Looks like you girls had a blast at the concert.

Does your coach have any openings??

Oh goodness… I’m not that crazy ha:) I started at 5:25 and finished a little after eight! He doesn’t currently but I will keep you updated for when he does. I hope you are having a fabulous day!

Today was a down week, 8 miles and the weather was glorious. It feels so much better when it’s 68 with low humidity!

I am glad you enjoyed the concert, I would think she puts on a great show.

My plans got cancelled so we’re going to just find something fun to do later on. Sometimes winging it leads to more fun.

Just did a long run and now we have a wedding.

Great job on your long run – you are awesome!

Just finished my cut back week long run (10 miles), working on homework (bankruptcy and criminal law…snore), and then on to the Dierks Bentley concert with my sister.

Have a great labor day weekend!!

That’s an awesome run!! I just finished 18 miles and have a baby shower for a friend later. I’m also training for St. George – it’s my first full and I am super nervous!! Looks like T Swift was super fun!! Hubby and I saw Eric church in Jan and it was seriously one of the best nights ever!

I love your T-Swift shirt! It looks like something you would buy at the concert!

Looks like you had amazing seats at the concert! I hope Taylor knew that she had an Olympic athlete in her audience ;)

Awesome job on 22! Do you set your Garmin to let you know that you are in your pace zone? Just starting to play more with mine.

Iron on shirt=genius! Also please tell me more about this pb gelato! Can I get it in boston somewhere? I need it.

Great job with the 22 miles! I think this marathon is gonna be THE ONE for you :-)

Awesome job rocking the long run! My run this morning was a 2 mile warm up, about 6 miles close to goal half marathon pace, and a 2 mile cool down. Sadly, I freaked out when I realized I lost part of the ear piece on my Jaybird headphones (I don’t even know how this was possible but it happened) and ended up taking a wrong turn. I finished the run 2 miles from my house by accident. OOPS! Thank goodness someone could come and pick me up. I really wasn’t feeling in the mood for 2 more miles. :)

The concert sounds fun! My girls would love to see Taylor in concert. Especially my oldest. She has been a fan of her forever!

Congrats on your long run. Glad it went so well for you!

Reading about your long runs makes me want to start training for a marathon again–my daughter’s almost a year old, so probably should fit one in before we give her a sibling! And today, we’re going to a 1st birthday party. As a side note, I don’t like Taylor Swift’s music, but I really wish I did because she seems like such a fun person and has great energy!

wow that looked like so much fun!! How creative was it to make those shirts. They look great. I love big ass salads too. Not much planned for the weekend, just got home from a two hour spin class. Have a great weekend

Taylor swift must have been an awesome concert!

20+ miles done this morning (took about double of what you ran) I feel pretty good, but I’m glad to be tapering the next 2 weeks!

On my agenda… If I can peel my eyes open enough I’ll go for a short trun. Nowhere near 22 miles. Probably more like 2 miles? ;-D

Ahhh! Taylor Swift! I am so jealous! That’s so cool that you got to go. And I love love love your DIY Taylor shirts- too cute!

I had 12 miles this morning, so now I am just relaxing and will be heading out to get a pedicure soon. No big plans on the horizon. :)

You are going to crush that marathon! :)

Taylor Swift puts on an amazing concert. I’ve been to two with my 15 year old daughter and her friends! My ears are still ringing…..

Congrats on the run! That’s an amazing pace! A cold kept me from my long run today, so I’m hoping to get it in tomorrow or Monday!

Heading to a baseball game today.

I’ve seen Taylor Swift twice, but missed her this summer. It is so appropriate that you ran twenty-two the day you saw her concert.

Did more than my share of walking but still averaged out OK. Which tells me I wasn’t pacing appropriately early on.

Everyone I have talked to says the T Swift concert is amazing!!! Looks like such a fun night!!
I am running on a trail today!!! Hooray! 1 mile only on the trail and then 2 miles on the track. Baby steps…
Have a great weekend!!

I went on my long run this morning around Mission Beach in San Diego. It’s a popular spot for runners and I had to stop at a red light along with a pair of other runners. I noticed they were both wearing I Run Because I’m Hungry shirts so I immediately struck up a conversation with them about your blog. They were super friendly and we ended up chatting for about half a mile – it was a great way to take my mind off of feeling tired and hot for a bit :)

Awesome!! Were there any special guests at this one?

First of all, congrats on your long run! You are incredible! And second, I am so jealous that you got to go see T Swift! HOW FUN!

I can’t wait to see taylor swift in concert!! She’s coming in October!

What a PERFECT DAY, I mean, longest run and Taylor Swift? Best sunday ever, I’m jealous :)

Great job on your long run! You are such an inspiration. I am so jealous you got to see T Swift! Who were her surprise guests for that show?