Subway for the 12th time!

The sister called bright and early this morning for me to come meet her at the gym……I definitely would not have gone if it wasn’t for her. Something magical happened at the gym, I felt like doing weights more than cardio.  My sisters heart stopped beating for a few seconds when I told her this realization of mine.  This is pretty exciting news because strength training makes you a BETTER runner and because I used to dread it and now look forward to it means that I might get faster and injured less often;)

I think that you know by now that when I like something, I have to have it everyday for about a month until I find my next new favorite food.

We got ready after our workout and drove two blocks to Subway for some bfast…walking would have taken too long.  We needed fuel. 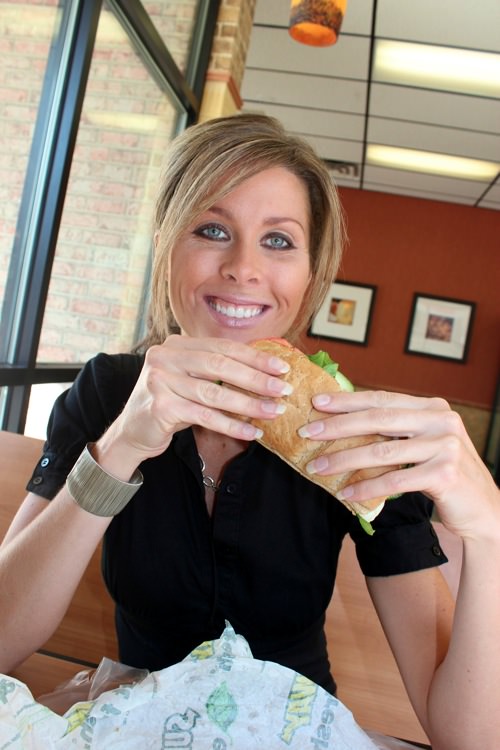 Egg and cheese Subways for both of us.  Pickles, jalepenos and banana peppers are more than acceptable for breakfast.   (Billy said that I still smell like Subway and it is now 5 hours after eating there, is it possible to get rid of that smell without showering?  I think not.) 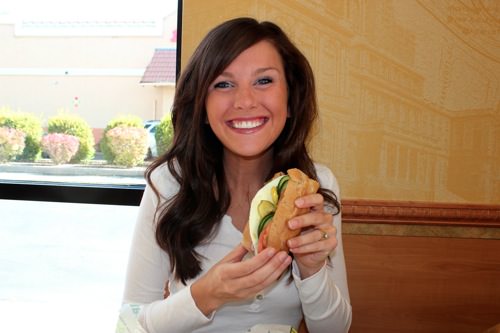 Now that Billy has a car he is being all productive and doing errands…..I don’t know how I feel about this. 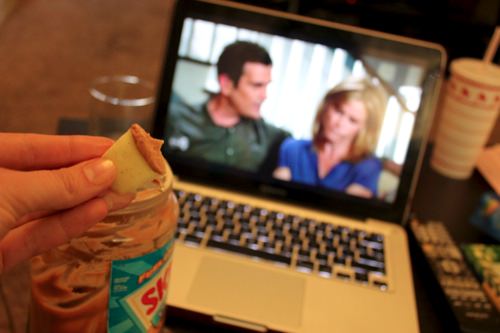 I entertained myself with Modern Family, PB and apples while waiting for Billster to get home to go to the foot ball game

Each bite of apple requires a new swipe of peanut butter, I don’t even want to know what bacteria is growing in that jar of Skippy.

Anyone else watching football today?  What about the World Series?

What is your October food obsession?

Are you a dipper?  Or do you use a knife like a civilized person when eating things like peanut butter?

Why I look forward to Sunday and some motivation. 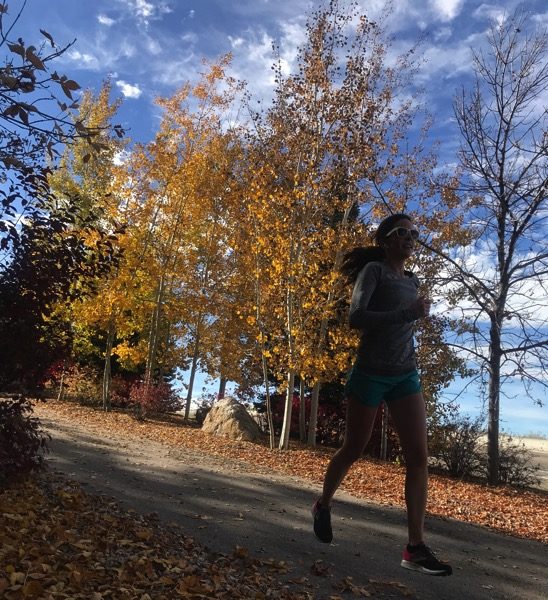 Weekending Talk and that was WEIRD

What a good sister you are!! Mine skipped out on me this morning…had to workout alone. :(
btw, the results from yesterday’s game are up!! http://lindsayslist.co/2011/10/you-cant-handle-the-truth/

I raced today in Dallas and I’m watching football! The clingyness of Subway smell is crazy!

No race today but I am running my first marathon tomorrow morning!! Eeeeek!!!!!

Yay for weight training!! My food obsession is probably almond butter & sweet potatoes or honey crisp apples. Too good. I am definitely a dipper!

I am definitely a dipper until the peanut butter gets so slow that I get it all over my hand trying to dip… :-/
p.s. I also had Subway today:)
p.p.s. I love your hair with the waves! I have only seen it straight.. so pretty:)

Psst- I had the same thing I had for breakfast, for dinner! Sausage links and scrambled eggs with cheese :)

No food obsessions, but always get hungry reading your posts :)

The only football today was my son’s game.
I’m going to a World Series party tonight and I’m so excited to see my Rangers kick some St. Louis butt. Has Billy converted to being a Rangers fan yet?
Today was a taper day so I only ran 12 miles. It was such a relaxed and fun run. Is is possible to taper every week?
You are stunning by the way. Is that post workout?
Also, your sister is stunning. Her hair is always amazing.

aww you two look absolutely beautiful smiling with your subs :)

Umm…. HOW does your hair look so cute after working out? WHAT?!

Watching the World Series tonight (go Rangers!!) and getting prepared to tailgate and actually go to the game tomorrow! Can’t wait!!

haha…i’m the queen of eating the same thing forever when it’s my latest obsession. i’d say for october it’s been fruit/cottage cheese and string cheese aaaand s’mores pop tarts and ben and jerry’s half baked pints. hey, gotta balance out the healthy with some sugar-chocolate overload. :)

I love all the pumpkin things!! :)

How is it that you look that amazing after a workout? Share your secret. My face stays red for HOURS and my hair is not ever that hot after being all schweaty.

Happy for you that you enjoy strength training now :) Just think “tone up”!!

October food: Pumpkin and apple. Not together. Separate but equal.
I’m a knife kinda girl. Sorry. I’m way too OCD to be a dipper.

Your blog is making me hungry.

I actually think dipping apple slices in the jar of peanut/almond butter makes me *more* civilized than when I use a spoon. At least there is an appropriate nut butter delivery system in play (the spoon, which I do most days, just makes me feel like a complete savage).

You can’t get rid of the smell, I promise. I worked at subway for part of hs and college and I swear I smelled like it even after I showered. Sometimes I pretend to be civilized, but most of the time, I dip to my hearts content! October obsessions = pumpkin everything!!

I Inhaled a subway sandwich in the parking lot today…I’m pretty sure the sandwich maker was watching and judging me, but I needed it after 20 miles. Awesome job with your weights!

Did not race today, but I am in a mood like I did. Totally riding an endorphin high…….this is fantastic!! could I be setting myself up for an endorphin hangover tomorrow?

I am STILL in the chocolate long john obsession. Had one yesterday and today. Also, new on the scene is buttered toast with jelly.

we are watching fb, but due to this extra energy I am basically trying my pom/cheerleader moves to entertain myself.

No football today.bi-week for all my favorites teams.

I dip pretzels and corn chips in peanutbutter, but spread it on bananas.

I’m more of a masher or soaker than a dipper or spreader. I strategically put my salad pitas at the bottom of the bowl so when I pour the Italian in it saturates and soaks the bread soggy or if cake is suppose to be the main dessert I choose to have a mug of ice cream as my main and mash up the as a mix in.

I’m lacking a main October food obsession. Probably my latest is eating things at cold temperatures. Cake from the freezer, pita pockets with shredded cheese not melted, bananas in cold milk..usually cold temps make people want comfort food..I’m wanting nothing to do with that. But also have an obsession with needing to make a dirt cake soon.

My October food obsession is butternut squash. I roast it and then puree it in the food processor. It is delish! and so much more healthy than the way I like my sweet potatos(butta, brown sugar, cinnamon and marshmallows).

I’m a spreader. I feel like I can get more on there that way. Especially peanut or sunflower butter.

No football. No world series.
I didn’t race, but I’m training for my first half marathon!

This October I am obsessed with peanut butter-than again, when am I not!!!
If you saw this weeks Family episode you’ll get this…Go Bullfrogs! lol

You look THAT pretty after working out + not showering? I hate you. :P

you look so pretty! love your hair in that picture!

My current food obsession are these amazing cookies from TJ’s. I can’t stop eating them!

Could you do a post about what kind of strength training you do to prevent injury? I had an injury a few years back and had to have surgery for it, and lately it’s been acting up again.

I had subway today too! Grilled chicken sub :) Right before my mile swim, and no cramping thank goodness. I skipped my weight session this afternoon, there is always tomorrow!
I skipped the football this weekend, but it will be back on next Saturday, we play Michigan State, huge game!

I’m a dipper too! My dipping favourite – apples and Nutella, or strawberries and nutella. My mouth is watering just typing that! My current food obsession is Naan bread warmed up a little in the toaster with spicy jalapeno hummus! Mmmmm…I’ve got to get a snack!! ;)

Wow..havent had Naan in over a year..I am long overdue..

I’m a DIPPER! Everything just tastes so much better dipped in a jar of PB!

My October food obsession is an ancient grain cereal I found. It sounds boring but I promise you- it’s SO delicious. So delicious that I’m out of it and I think I’m going to go to my other October fav- pecan pie! So good!

let’s talk about how your hair looks AMAZING! tutorial? i think yes.

Mindy…YOU MADE MY DAY! Thank you so much…I will definitely do a tutorial!

I love the World Series as much as I love pumpkin pie. And that’s saying a lot.

I haven’t gone to Subway for breakfast yet but you’ve convinced me to give it a go.

I LOVE watching football. So fun.

I raced a 5k zombie dash today, got a PR and was the first woman across! Wahoo!

I love Subway. So yummy.

My October obsession? Homemade yogurt! I made it for the first time a few weeks ago & can’t get enough of it! SOOOO good!

Okay, this past week my eating has been horrible. I’ve been eating way too much, and crap food… but my October obsession has been bananas. Unfortunately, though, all I have right now are frozen bananas and they just don’t sound good.

I’m laughing a bit to myself reading all these comments where everyone is going for the Rangers, and on my facebook page it’s all “I love Cardinals!” “Go Cards!” etc. etc.

Today was my rest day, and I’m still trying to work back up to half marathon distance for my half on November 6. The closer it gets the more nervous I get, and I’m afraid I may have had a setback… =\ BUT I signed up for a tri! Now I just need to learn to swim and get a racing bike…

Good Sunday morning Janae,
first of all your sister is as beautiful as you. I guess it’s in the genes and I’m not allowed to have them.
Jalapenos for bfast, is that even a question? Send a double portion my way.
X

i went to see penn state play northwestern! i wish i ate better this october but i have been traveling so much! my obsession is caramel dip and apples…so good!

I love Subway! I think I eat it every weekend for lunch or dinner lol

i actually did race (today) yesterday! just a little 10K, but nice fall-weather run :)
i watched football today…go steelers!
total dipper…but i live by myself so all the saliva/germs/crumbs is all mine.

October food obsession would be the obvious, PUMPKIN! I’ve been putting it in absolutely everything… yogurt, oatmeal, on toast! But I’m also getting obsessed with pepperoncinis and banana peppers! (I used to hate them!)

My sorority held a 5k today on campus and all the money goes to the American Cancer Society. It went awesome!!

I didn’t know Subway had a distinct recognizable smell, lol.

Mike watched football for most of the day while I was in the kitchen baking. So I saw football, but didn’t watch.

I have never been able to understand that about the Subway smell. It never goes away!

you look so pretty in your pic!