Before Billy even had a chance to give me a hug I already had the fridge door open with the crock pot on the ground next to it.  I just threw in whatever produce I had.

I like to think my randomness is a strength not a flaw. 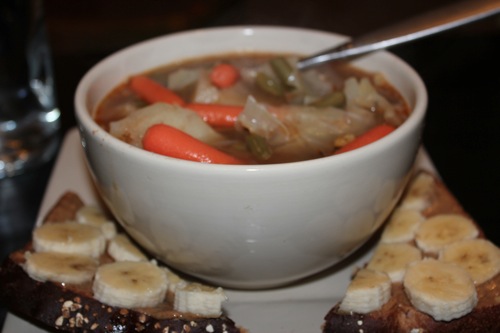 On the side I had a piece of whole wheat toast with almond butter and banana.  I have eaten every morsel of candy within 500 ft of my home, I will now be turning to natural sources for my desserts.  That is until tomorrow and I stop at the store for some Christmas themed candy.  Holiday themed candy always tastes so much better than the regular.

Watching some good ol’ Veronica Mars until my 9:15 bedtime.

Do you plan out your dinners in advance or go by a whim of what sounds good?

-I usually have a general idea of what I want but dinner is usually is whatever sounds good at the moment.  That’s just me living on the edge.

Weeknight Dinner Rituals: How we do it and how it helps our family 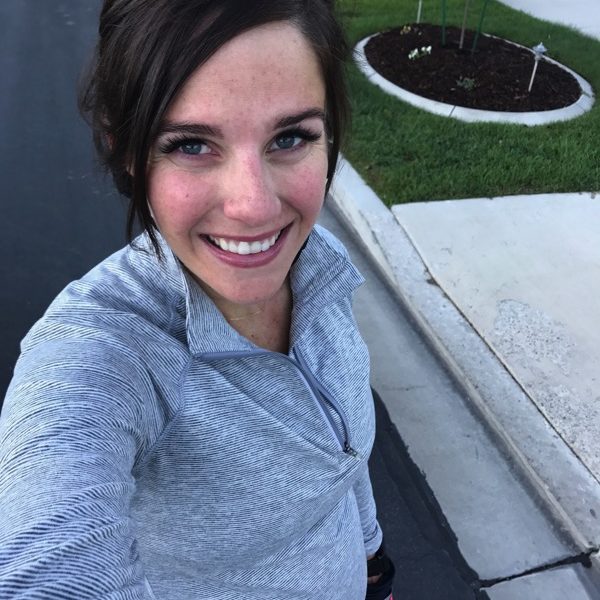 ugggh, I wish I had your passion for creating fabulous meals! I usually wait until about 4:30 when my 16 month old is whining at my feet because he is hungry and my girls are fighting because they are hungry and tired. I look in the frige and the cupboards and usually resort to something like grilled chicken and rice and some spinach salad. Or grilled Tofu sandwiches. Easy and healthy but certainly not tasty and exciting after eating the same things over and over again. Your blog inspires me…..to have someone else cook for me.

What is it about that darn holiday themed candy? I am the same way! Somehow a Reeses peanut butter cup tastes 50 times better when it is in the shape of a Christmas tree! :)

I try to plan our dinners in advance or we end up eating the same thing every night.

Anytime I try to plan out meals, I end up changing it at the last minute because I feel like eating something else. That soup sounds delicious though–maybe I should make an "all the produce in the fridge" soup tomorrow!

That soup looks delicious! I am a total meal planner. I eat according to what produce I have, so I pretty much know how it's all laid out. Is that sad….? Probably…
See you tomorrow. YAY!!

mmmm. love soup! and i'm going to make an effort to try to replace nutella/pb with almond butter.

HA! my bedtime last night was 9:45 :) Teaching kids is exhausting…

I meal plan every week, but sometimes it changes depending on my mood. I usually do not go to the store in the middle of the week for anything though! I found that meal planning really helps to save me some $$

i wish i could meal plan. i just don't have that kind of structure or forethought. i do love soup and try to have it as often as possible. looks yummy!

I have to plan out meals because otherwise we would be eating cereal for dinner after our freezer stock of leftover meals runs out.

I try to meal plan, at least so I have ingredients in the house to make enough meals for the week without another trip to the store, but I almost always modify when I come home wanting something else!

Okay, I know I said this before, but LOVE your blog! I know I will pick up some healthy snack ideas from…I'm a candy junkie too. Damn sweet tooth!! :)

I love to cook, and I tend to only want whatever sounds good RIGHT THEN. Which makes meal planning challenging.

But, Veronica Mars, oh how I loved it! I didn't watch it while it was on the air, but we watched the WHOLE series this summer (after we cut cable)… OMG. HOW did I miss that?!

I'm a planner. IT doesnt always go AS planned but I try to plan out the meals ahead of time. Although my favorite meals are usually the ones I put together on the fly.

Yes. This is an old post.
Yes. I'm still commenting.
Why?
I just learned you like Veronica Mars.
How are we not within driving distance?
You're coming to Boston in April.
I'm in RI. Let's make this happen. No creeper ;)